Competition was conducted on September 2nd, these are the results: 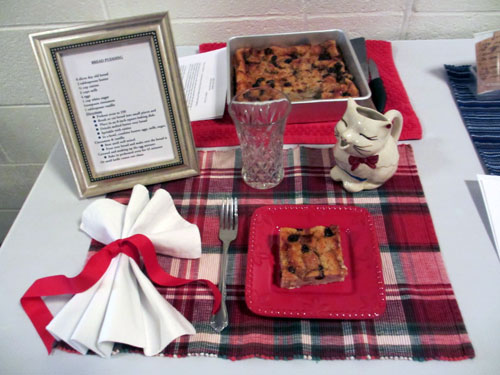 Waste not, Want not. .A saying that goes along with the making of bread pudding.

Stale bread not to go to waste on a farm where there was already fresh milk and eggs.  A baked combination of bread soaked in the liquid of eggs, sugar, butter and milk made use of items readily available.  Mixing it up and letting it bake in the oven while we did evening chores it was a delightful aroma greeting us when we returned to the house. We knew we were having one of our favorite food items.

It was never really written down by my Grandmother as to the measurements just dump and pour.  My Mother however measured and made it much easier to pass on the Bread Pudding recipe to my daughters.

What makes my bread pudding an heirloom recipe is that growing up we ate bread pudding at our evening meal quite often. Served up in a bowl with milk poured over it.  Hot, warm or cold it was good no matter if it was the main meal or served for desert.

A dish I can remember having at my Grandmothers house at Holidays and a food easy to make and take to church and community functions. It was easy to transport and doubling the recipe make a large pan to share with all.

Directions:
Preheat oven to 350
Break or cut bread into small pieces and place in an 8-inch square-baking dish.
Drizzle melted butter over bread
Sprinkle with raisins
In a bowl, combine beaten eggs, milk sugar, cinnamon and vanilla
Beat until well mixed
Pour over bread and make sure the bread is covered and soaking up the egg mixture
Bake in preheated oven for 45 minutes or until knife comes out clean. 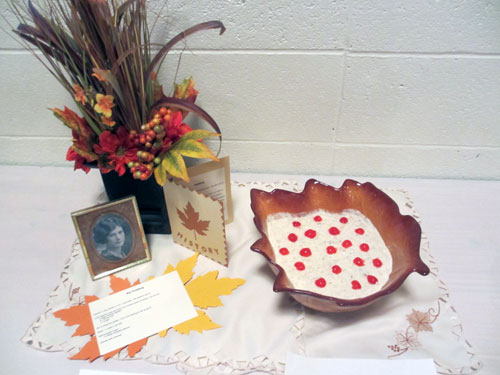 Definitely not a heart smart recipe. This dish was always saved for special get togethers.

For as long as I can remember, when my mother’s extended family got together for a big family meal there was a big bowl of nut pudding.

This generally occurred Christmas’ and Easters. My grandma Diede (my mom’s mother) always made it. It always had cherries on top and was in the same round pink pyrex bowl with handles that to me looked like little spickets to drain something out of the bowl. I don’t know what happened to the bowl, but try as I might I haven’t come across another one since.

My mom thought Grandma got the recipe from her sister Irene who had gotten it from their mother Maria Stoebner.

Dissolve 1 pkg Gelatin in 1/2 c cold water. Set aside to set up.

Stir in dissolved gelatin. Cool until starting to set up good. 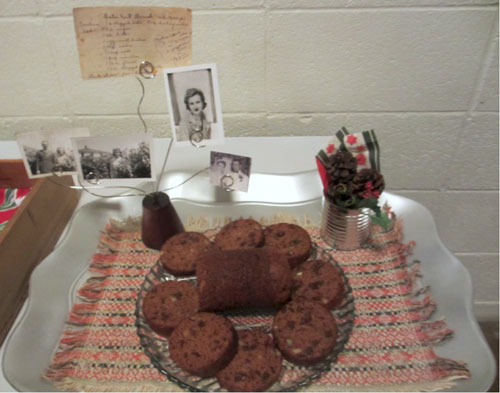 My Mom, Dolores Gau Sibson, has been making this recipe for 67 years. Date Nut Bread round shaped from being baked in cans to look fancy has been on the Christmas table for decades.

When I asked her about this recipe and why she made it every year this is the story she told.

In 1945, she was 14 years old. Her parents Alvina and Henry Gau lived near Ethan, SD. They were very good friends and visited back and forth a lot with the Bobelyk’s from Armour, SD. Mom always thought of Anna Bobelyk as a fancy lady.  Anna served this Date Nut Bread baked in cans when they were there for a Christmas meal. The bread was moist and delicious. The original recipe written by Mom has Mrs. Bobelyk name on the recipe corner. Mom noted the number and size of cans later on the recipe card.

Dolores Marie Gau married Leo F. Sibson May 2,1951. They had three children Steven, Mike and Lynette. After 35 years of raising cattle and crops they retired in 1990. They celebrated their 60th Wedding Anniversary in 2011. My Dad passed away February 11, 2012.

My family enjoys this bread recipe and it freezes well. My sister, Lynette, says Date Nut Bread is probably her most favorite recipe that Mom makes and it always tastes good. She requests the bread each Christmas. Lynette says that Mom bakes the bread in cans never a loaf pan.

The Date Nut Bread is served today on one of my Mom’s plates. 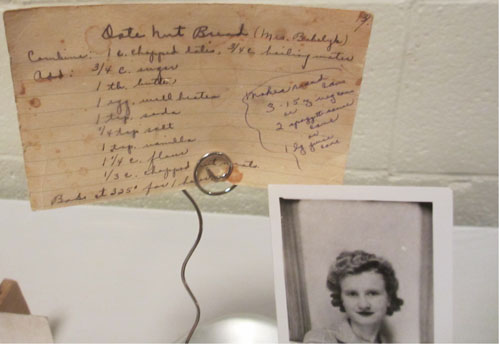 Place chopped dates in a bowl and add boiling water. Set aside and let mixture stand.

Cream butter and sugar together. Add the egg.

Pour the mixture into greased cans. Bake in a 350 F oven. 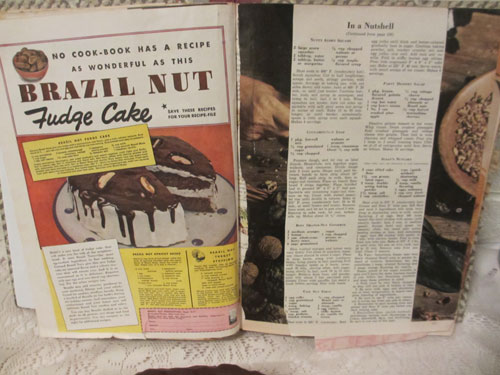 box…DOESN’T ALWAYS HAPPEN…That is why I was so amazed, when, several years ago at an auction, I found that

The dates are not always visible, but I believe this recipe is from about 1937 in GOOD HOUSEKEEPING magazine.

Interesting how they emphasize the small amounts of egg and shortening needed. Some ingredients had a

higher availability during the “Dirty Thirties”. Shortage of supplies lead us to make the most of what we
have

three elements for survival on the prairie, and adaptations of our favorite recipes.

Even today, because of the cost of some ingredients, this is a “special occasion” cake.

I used this recipe once for a chocolate cake contest, receiving a First Place Blue Ribbon.

It is an excellent tasting cake…especially with a glass of cold milk!

In some of the advertisements for the Brazil Nut Association, which I located on the internet, many
suggestions are made for the use of their product:

“…Add crunchy goodness to sandwich fillings and salads. Grand for cookies, muffins, breads…keep a bowlful on your

buffet for the holiday season”

Brazil nuts to your favorite batters.”

“add one cup ground, chopped, or sliced Brazil Nuts to your favorite cake or cookie batters.

I am eternally grateful to the wonderful lady who compiled these amazing albums of history.

Hats off to “Grandma”—however “great”

— you’ll be Always a part of the recipe.

Ground Brazil Nuts give this fudge cake a glamourous new flavor, and a rich, velvety texture.

And think about it…you use only ONE EGG and 1/3 CUP SHORTENING!

Economical and easy to prepare. 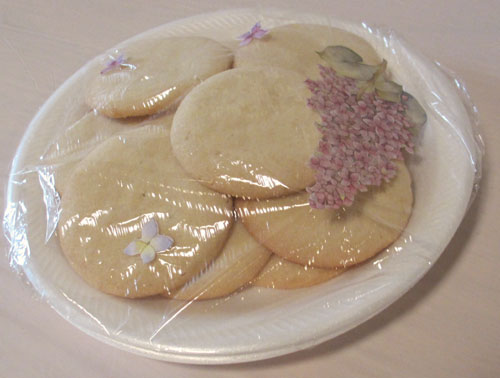 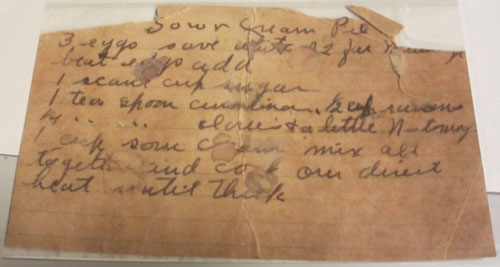 Rose Virginia Margaret Berens was born March 7, 1901 near Spencer NE and died January 25, 1988. In 1917, she married H.O. Clinton they had 8 children. Grandma was known on the women’s softball field as “Homerun Rosie”. My Grandparents celebrated 59 years together before Grandpa’s passing in 1976. Grandma was the Avon lady in Spencer and the surrounding area for nearly 31 years.

My Grandma Clinton cooked on a wood stove most of her life. The Corn Starch Pudding recipe was never written down by my Grandma. When I asked my Mom, Shirley Bailey, why she replied -It’s on the Box. Argo did have variations of this recipe on the box for many years. In 2008, Argo went to plastic containers. The easy Argo gravy recipe is on the container now.

On the corn starch box it was called Vanilla pudding-but my Mom says they always called it Corn Starch Pudding. With a 1/4 cup of corn starch I can see why they did. Since the 1940’s my Grandma would make this pudding on special occasions. Birthday cake with Corn Starch Pudding is one of my Mom’s favorite food memories. My Uncle Art Clinton tells how his Mom sent a small dish of Corn Starch Pudding along with his lunch one day and how envious his friends were. My Mom shares the story that how a neighbor happened to stop by ate a piece of chocolate cake and some Corn Starch Pudding. Later he was about town telling everyone how he had eaten like a King at Rose’s house. My Grandma did not make dessert very often but when she did she made pudding. Grandma would use this recipe when making Banana Cream pie.

My Mom and I have continued to make this recipe through the years. I can see why Grandma used this pudding recipe for her large family. It has very basic ingredients and can be cooked in 10 minutes. I prefer butter and use it in the recipe rather than the Mazola margarine.

One of my Granddaughters loves Corn Starch Pudding. So I am reassured that this recipe will continue to be a family heirloom recipe.

Combine sugar, corn starch and salt in a medium saucepan. Gradually stir in milk until smooth. Bring to a boil over medium heat, stirring constantly, and boil 1 minute. Remove from heat. Stir in Mazola margarine and vanilla.