Competition was conducted on August 13th, these are the results: 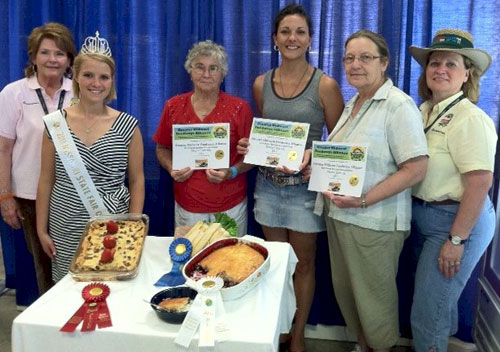 From left to right (Image by Josephine Hyde): 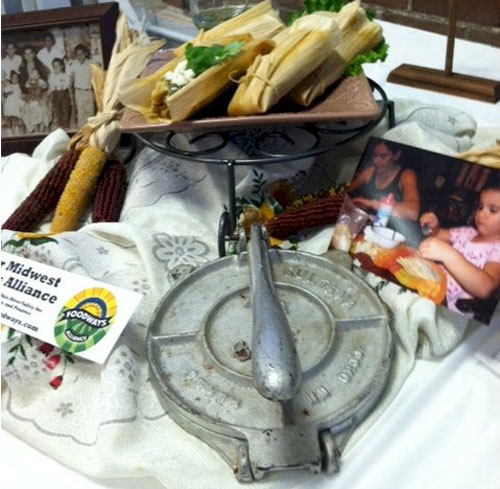 I was born a Texican; the adopted and endearing term used to describe someone who is both Texan and Mexican. I attribute my warm Southern upbringing to my Texan mother and my assiduous and obedient values to my Mexican father.

Though it was difficult leaving Texas, I joined the US Army and moved to Missouri in 2009. My first visit to the Missouri State Fair took me back my roots. Though I took many trips to the State Fair of Texas with my family throughout my life, I speak of my occasional childhood vacations to the village where my father grew up in Durango, Mexico. At the fair, I walked past a vendor roasting fresh corn on the cob; the smell of melted butter and heated kernels took me back to my Mexican grandmother’s kitchen. I remember waking every morning to the scent of fresh ground masa and warm corn tortillas cooking on the comal (flat-topped iron skillet). My abuelita (grandmother) would grind the dried corn from her harvest on a molcajete (grinding stone made of volcanic rock) and make her corn tortillas, tamales and gorditas by hand and by sheer grit.

During one of our summer visits, we planted rows and rows of corn with bare feet, busy hands and seed sacks. My abuelita harvested all her corn-and still does-by hand; the dried product destined to create one of her many fabulous corn-based creations. The traditions and sensory influences passed down by my abuelita, and by the women before her, will continue to live in our hearts, minds and bellies for generations to come.

Tamales are a generational family favorite for every occasion.  In honor of my abuelita, we carry on this tradition by gathering in a tamalada (tamale-making party; a term cited back to 1873).

**One of the pictures in my display was taken at our tamalada last Christmas where three generations of tamale makers where hard at work.  In the other photo, my abuelita is seated in the center surrounded by the eldest of her 14 children. My father, Simon, to her immediate left.

Cook onions in oil in a saucepan, uncovered, over medium-low heat until softened. Add garlic and oregano; cook mixture 3 minutes more. Stir in tomatoes and poblano; bring mixture to a simmer. Simmer sauce 10 minutes, stir in lime juice, and season with salt and pepper. Transfer sauce to a blender. Blend sauce until it’s smooth. Transfer sauce to a bowl; stir in cilantro. Add pork; chill mixture until it’s completely cold.

Combine shortening, butter, salt and baking powder for the masa dough in a large bowl and beat until mixture is fluffy and light, about 5-6 minutes (by hand). Interchange beating mixture while incorporating the masa harina. Gradually pour in chicken broth while stirring and scraping the sides of the bowl. Cover the bowl and refrigerate masa for 1 hour.

Soak husks for at least 30 minutes. After soaking, scoop 1/4 cup masa dough onto the husk. Spread dough and spoon 1-2 tablespoons pork-chile filling down the center of the dough. Fold tamales and place in an upright steamer over 1-2 inches of boiling water. Steam tamales for about 1 hour. Tamales are done when they are firm and husks easily pull away from masa. Uncover the steamer; let tamales stand 10-15 minutes before serving. Serve with queso fresco (Mexican-style farmer’s cheese) and salsa verde.

Combine all ingredients in a molcajete (grinding stone) or food processor and blend well. Let sit for 30 minutes before serving. Enjoy! 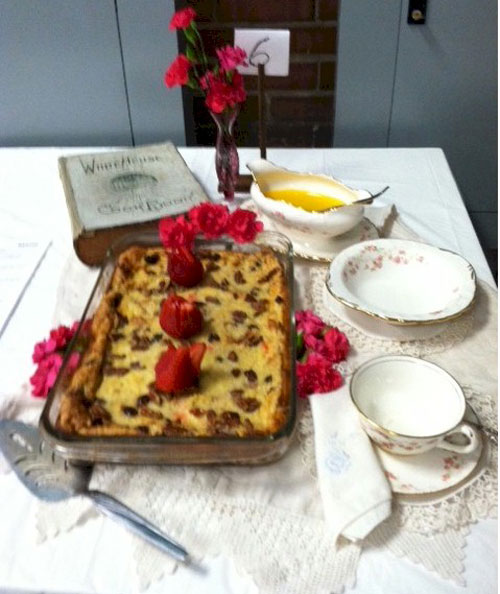 Mom’s and My Bread Pudding (Image by Josephine Hyde)

Mom’s and My Bread Pudding

Mom found a cookbook in the attic of a old house, that we lived in.  My Mom could not read and I became her partner in reading and cooking when I was 6 yrs old.   Mom made all the bread we ate and sometime she made extra and we used it from the recipe in this book.  It is the White House Cookbook which I own today.  We use the recipes many, many times until we learned + did it by heart.  I have used this recipe in my mind and added to make it fit the occasion, I was using it for..

My Mom was my inspiration whether I cooked for family or crowd.

I was fourth oldest girl and I seemed to catch my time in the kitchen with Mom.  I am now 86 years old and I still like M & M pudding.

Mom’s and My Bread Pudding

Soak bread crumbs in milk with raisons + nuts.
Add all together.
Pour into buttered dish
Bake 350 until it sets in middle. 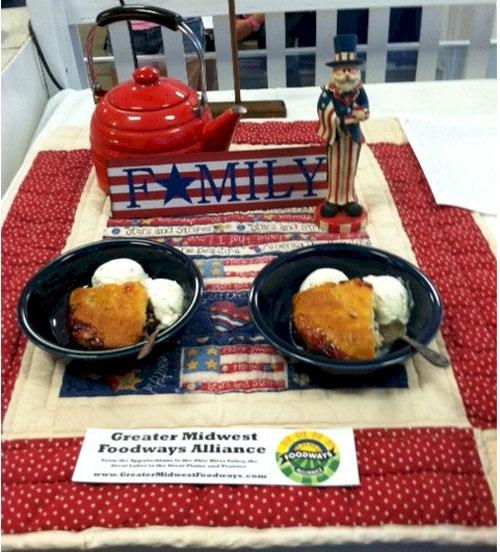 July and August wouldn’t be complete without lemon blackberry cake.  This recipe belonged to my husband’s great-grandmother Elizabeth Baker who came from Lewis County, Missouri.  She was born in 1868.  The recipe was passed on to her daughter Bessie Baker Clark.  As a young bride, I would often accompany my husband to Grandma Bessie house to pick blackberries early in the morning.  The first task on returning to the house was to wash enough blackberries to make a blackberry cake for dinner.  I was given the recipe and baking dish as a wedding present from my Grandpa Earl and Grandma Bessie when my husband and I married in 1969.  Although my husband’s grandparents are no longer living, we still get up early in July and August to pick blackberries and have fresh blackberry cake for dinner.  With the arrival of electricity in rural areas of Missouri, we can have blackberry cake any time of the year; but there is nothing better than fresh blackberry cake made within hours of picking blackberries out of the patch in the pasture.