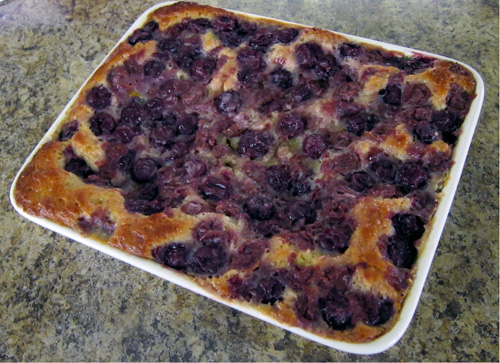 My husband’s grandparents (both maternal and paternal) immigrated from Germany establishing and building two small towns in Kansas. They brought their traditions and family recipes with them. Eventually, my husband’s parents would move a state away and my husband two states away. From the time I met my husband, he talked about how, as a child, his parents would take him and his siblings back to Kansas for family gatherings. Food, polka dancing and weddings were the highlights looked forward to in their everyday lives. My husband was especially fond of a dish his Aunt made called Kuga. He described it as being a sweet bread covered with berries or other fruit on top and cream on the bottom. It was best when right out of the oven. Of course, I wanted to make him this long remembered dish but didn’t have the recipe. I looked through many cookbooks including German ones. I found recipes for Kuchen and Kugan but nothing for Kuga and also nothing like he had described. I asked his mother and she remembered it well, however, did not have a recipe for it. At a recent family reunion, they were serving pans of the infamous Kuga. I asked the daughter and daughter-in-law of his Aunt (who had since past away) exactly what they called it and about how my husband remembered it so fondly. They both called it Kugan. I proceeded to ask them if I could have the recipe. Both of them immediately clamped their mouths up tight and looked up. Needless to say, it was an awkward moment. Evidently it was a “secret” family recipe that only a few privileged members knew. Not knowing what to do, I quietly said, “okay,” turned around, and went back to join my husband who was talking with another cousin. Still, in a little shock, I told them what just happened. My husband’s cousin was very surprised that they reacted as they did and said he would get the recipe for me. Well, it’s no longer a family “secret recipe”. Yes, I will pass this down to my children and grandchildren but also share it with others. You see, I believe food that taste good and makes people happy should not be kept a secret, but rather, shared and passed on so as not to be lost. As for the actual name of this delightful dish, Kuga, Kugan or Kuchen it really doesn’t matter because any name you call it, it’s all good.

3 cups cherries or any other fruit

Combine milk, sugar, salt and 2 tablespoons butter; cool to lukewarm. Dissolve yeast in warm water in large bowl. Add milk mixture, egg and 1 1/4 cups flour to yeast; beat until smooth. Add remaining flour and beat well. Pour into 9xllx2 baking pan. In another bowl, mix fruit, 1/2 cup sugar and flour and spread on dough. Cover and let rise until double in bulk. Beat egg. Add cream and 1 cup sugar. Spread over fruit. Bake at 350 degrees for 30 to 40 minutes or until custard is set. When knife inserted it should come out clean. Towards the end of baking time cover with foil to prevent overbrowning.