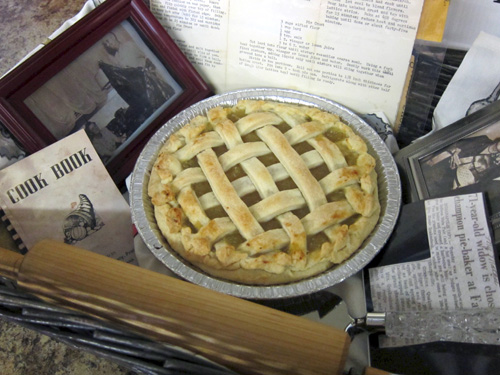 My family has a very long history at the Indiana State Fair. Both of my father’s grandparents competed in the fair, along with his parents, himself, and later my sisters and me. Our family was very fortunate to reap much success in hogs, sheep, and horses – as evidenced by the numerous ribbons my grandmother, Maxine (“Mimi”) is seen in a photo stitching into a quilt for her father, Otis Quakenbush. Mimi would later go on to marry my grandfather, Bill Nash (“Pappy”) and together they would go on to win many champion classes at the Indiana State Fair, for their Hampshire and Yorkshire purebred hogs. Pappy would also go on to serve on the Indiana State Fair Board of Directors, being honored as President in 1981. Sadly, Mimi passed away in 1979 from ovarian cancer, leaving behind a legacy of love for the Indiana State Fair that she passed along to her children and grandchildren.

Upon Mimi’s passing, her younger sister, Madonna, became like a grandmother to my sister and 1. While Mimi and Pappy’s State Fair focus was on hogs, Aunt Madonna (or “Auntie M” to us), was very successful with quarter horses, that she raised along with her husband Bud Alderson. Auntie M was also extremely involved in the Culinary Arts projects at the Indiana State Fair. From jams, jellies, canned fruits and vegetables, and desserts, Auntie M always had several dozen entries in the fair. But what Auntie M was best known for were her delicious pies. This is a skill she learned from her mother, Maude Quakenbush, and her grandmother, Grace Ramseyer. My father, who is now 75, fondly recalls all of the different pies his grandmother (Maude) made for all of their family gatherings. Her mother Maude was honored to win Grand Champion Pie at the Indiana State Fair in consecutive years – with her Pineapple Pie in 1959 and her Raisin Pie in 1960. I have included a photo of Maude accepting her Grand Champion Pie award in 1959. Auntie M would later win Grand Champion Pie herself in the mid-1980’s – with her adaptation of her Mom’s award winning pie with her Apricot Pineapple Pie.

We lost Auntie M three years ago this past February. I wanted to honor her and thank her for all of the years of her treating me as her granddaughter. I decided that there was no better way to remember Auntie M than by carrying on her and her mother’s tradition of competing in Culinary Arts contests at the Indiana State Fair. Her children gave me many of her cookbooks, with the oldest one d~ting back to 1952. In all of her cookbooks, there were many versions of pie crusts that Auntie M had written down over the years, which I have had laminated for keepsake. And of course, her Mom’s award winning pie recipes were included as well (which are included). So, three years ago at the age of 38, using the recipes and tips from my ancestors before me, I set out to make my first pie. In all transparency, that first year was a little rough (I MAY have thrown pie dough at my husband in frustration). But with some patience, practice and love, I have grown to enjoy making pies. For this contest, I have made a few updates to Maude’s award-winning pineapple pie. I use butter instead of lard, as well as use no eggs. For the filling, I prefer using tapioca over cornstarch, and have added a few spices to add dimension. While I have not won any of the accolades of Auntie M and her mother, I still feel as if I have a whole host of angels smiling down on me every time I make that final crimp and put a pie in the oven.