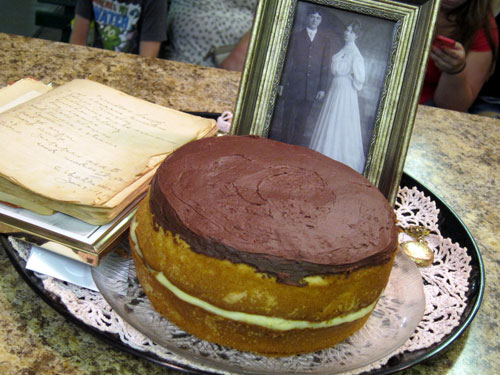 I’m from Greentown Indiana where my grandparents owned Millers Bakery from 1922 until 1938. The bakery was long gone before I came about but there were always lots of baked goods around while growing up. Growing up just three houses away certainly had its advantages, as I remember giant cinnamon rolls, cakes and lots of pies.

When you think of picnic and reunion food I suppose salads come to mind, maybe baked beans or macaroni and cheese. My family’s contribution was always baked goods. Bread, rolls, desserts and lots of them. Even though the menu was the same the reunions were somewhat confusing when I was little. Both my Grandmother’s maiden name and married name was Miller. It could be Papaw’s or Mamaw’s reunion, I just couldn’t tell. Soon though I figured out it was Mamaw’s reunion when her version of Boston Cream Pie was there. Because it was her brother Roscoe’s favorite she never failed to make it for him. She simply didn’t make it for Papaw’s side of the family. I guess it wasn’t anybody’s favorite.

In 2008 while clearing out my mother’s house I found Grandma’s recipe book which I have brought along today. Handwritten in pencil, she added dates, names and addresses to most recipes. It kind of reads like a family history. There’s even an obituary note on one recipe that says the lady who gave it to her died in 1931 due to an auto accident. Mamaw was married in 1906 and took up housekeeping in rural Miami county with I suspect a wood burning stove. Very few recipes have temperature or time listed. The oldest recipe is dated 1894, and the most recent 1952. Her mother’s molasses cookies are there but undated. I found her Boston cream Pie to be two separate recipes with a third for icing.

Today I have brought the book, her wedding photo and a pin given to her on their wedding day by Grandpa. Also I have a picture of papaw in his bakery.

Cream butter and sugar. Add eggs one at a time till combined. Sift together dry ingredients then add alternating with milk. Mix Well then turn out into two greased and floured pans. Bake at 325 for 25 Minutes.

Combine dry ingredients. Use yolks only, beat well then add to dry mix. Scald milk and add to mix. Cook till smooth and thick then stir in vanilla. When cool spread between layers of cake.

Combine dry ingredients. Cream butter with 1/2 of mix. Add remaining mix alternating with milk, beating to spreading consistency. Blend in vanilla. Spread only on top of cake not on sides.