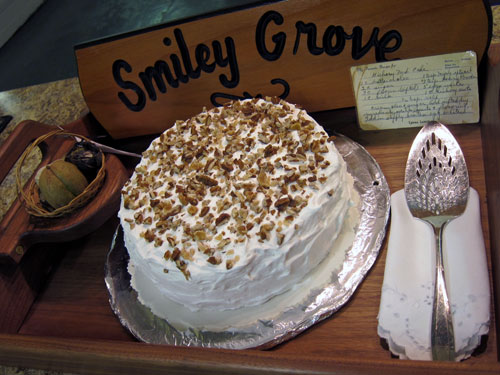 My Indiana roots go back a long way. In 1838, my great-great grandparents, Walter and Susannah Smiley, purchased approximately 48 acres of mostly cleared land along the Mississinewa River in Randolph County. As time went by, my grandfather cleared an additional area along the river to graze his cattle and horses. It became a beautiful grove with many hardwood trees including oak, poplar, sugar maple, black walnut and shag bark hickory in addition to several other species. Severe storms and other environmental factors have damaged or destroyed several of the trees although there is still an abundance of hickory trees.

Gathering the hickory nuts each fall has been a long-time family tradition. Family members gather on a crisp fall day to fill baskets of nuts which are then laid out on the floor to dry under beds in the farmhouse. The farmhouse always has visiting mice in the winter so we hope not too many nuts get “stoten.” My sisters and I often welcomed barn cats into our upstairs bedrooms at night which served to better control the mice population.

A typical evening tradition in our family during the 1950s was to crack hickory nuts as we sat in front of our black and white TV. My father would use a hammer to hit the nuts which he placed on an Indian stone found along the Mississinewa River. (Historic records indicate Indian encampments along this portion of the Mississinewa were common.) My mother, sisters and I would pick out the nutmeat with the siblings being careful not to eat too many lest they be scolded. The chore was very labor-intensive as a full evening’s work would yield only a small quantity of nuts.

Special desserts were made for family reunions and holiday celebrations. Aunt Letha’s hickory nut cake was baked on only very special occasions due to the scarcity of the nuts. She was a very good baker who developed a successful business in the 1960s when my uncle lost his job due to downsizing. She gave me the recipe several years ago which she said came from an old 1950 cookbook.

My husband, Jon, and I now own the farm which we call our “retreat.” It has been continuously owned by a member of the Smiley family since 1838 and, as such, is registered as a Hoosier Homestead Farm with the state of Indiana. The old farmhouse is rather primitive but it is still relaxing and enjoyable in winter to sit around a crackling fire in the wood-burning stove while reading or listening to classical music on a local radio station.

Place over boiling water and beat with mixer until mixture holds its shape. Fold in 1 1/2 tsp. maple extract. Beat until cool then spread.