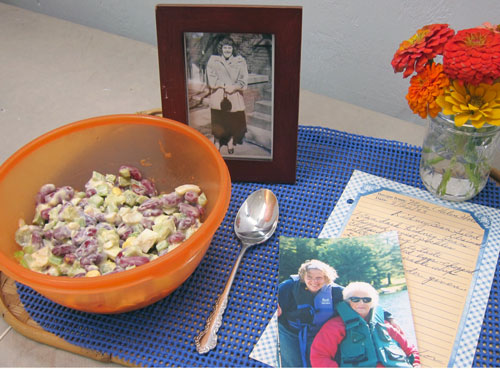 My mom’s Kidney Bean Salad is famous. No, I should say Infamous!! Why, you ask? My mom loved her kidney bean salad, unfortunately she was one of few people who did.

She made this recipe for every party and get together she was invited to and no one ate the salad but her! She also made the salad as a side dish and served it at dinnertime— no one in the family ate it but her! When I told my brothers and sister I was making Mommy’s Kidney Bean Salad for a contest they just giggled. I will get back to the biggest event that the salad was served at but not eaten, but for now let me tell you about my mom; Helen Holas.

Helen was born November 11, 1933 to Vince and Betty Brezinsky. She was first generation in the United States born to Czech parents and the youngest of three children. She was born and raised in Cicero, Illinois. She had a stay at home mom, a dad that drove a street car and a Babi (grandma in Czech) that lived with her.

At the age of 14 Helen met the love of her life-Tony Holas and she dated him all through high school. At the age of 18 she married him and they were married for 53 years. They had four children; I am the oldest. My dad owned a flower shop and my mom helped him there once all of the kids were older’ but before that she was a stay at home mom.

And boy could Helen cook!! She made great meals and baked wonderful things. I’m not sure what went wrong with the kidney bean salad-don’t get me wrong it really doesn’t taste bad; I just don’t like it!! I don’t like kidney beans and I am not fond of egg salad so I think that is why I don’t like this salad. I remember the first time I tried this salad; my mom served it with dinner. I took one bite and spit it out and said this is yucky. As my siblings came into existence the same thing happened with them. I talked to my sister this morning and she said  you know there is nothing wrong with the salad our family just didn’t like kidney beans.

The most infamous appearance of the salad was at our annual fish fry. I had three bachelor uncles who owned a house and cabin on a lake in Wisconsin. Going back at least 50 years our family took a vacation for one week at the end of June with one goal: get enough fish for the Fish Fry in August. We would all fish and catch crappie and bluegill.

Originally the Fish Fry was held in my parents back yard. And there were about 30 guests; family and a few friends. Thirty years later when we had the last fish fry it was spilling into three yards and there were over 125 people. It became the social event of the season at least in Berwyn. There was beer on tap, fried fish, and side dishesgalore. Of course mommy insisted on making kidney bean salad. My sister Cindy would say,” Mommy why are you making the kidney salad, nobody eats it?” She would say, “I don’t care, I like it, I’m going to make it. As you probably guessed there were a few nibblers but mom was the primary consumer; AGAIN.

Unfortunately we lost mom at the age of 73. She had Alzheimer’s and that is why the recipe she wrote is so special to me because the last few yearss of her life she could not remember any of her recipes. You may be asking why I asked for this particular recipe–I didn’t. One day I gave my mom a blank cookbook and asked that she write all her typical recipes so they would never be lost. I told her specifically her chili, and stew. When I got the book back the kidney bean salad recipe was in it! Not only does it make me smile when I see a recipe written in her hand but I guess you noticed her recipe style-no measurements. On this particular recipe the bottom line cracks me up-may double recipe for parties. I really don’t think she realized she was the only one that ate this. In the display I placed the salad in a plastic/Tupperware bowl because that is the only way my mom would serve the salad. The picture in the frame is of my mom when she was in her early 20’s. And the other picture was taken the last summer of her life right before her and I got on the pontoon boat with Uncle Joe to go fishing in Wisconsin.

We were supplying for the last fish fry!

Mix in order given. Chill