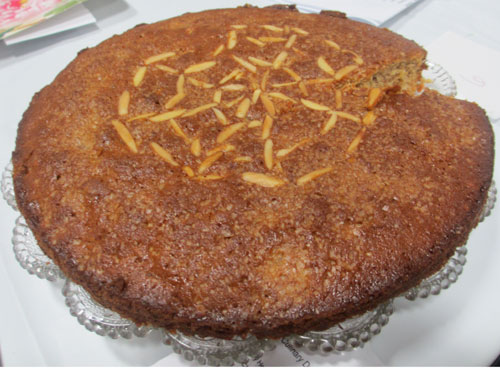 It started on the Westray Islands of Scotland. When the early ancestors came to America, they settled in Virginia. Our branch started with Willis Calinin Westray, who went to St Louis. His son, Vernon Kennerly had two families. His second was William Howard. He married Marge and they had three children, all born in different parts of the country because Bill was in the Navy. The first Richard Howard was born in St Louis. When the children were in their early teens, Bill was stationed in London. While there, they went to Scotland and the family plat. Here is where they got the recipe for Dundee Cake. I met Richard when he was in the Navy. We had 2 sons, the first born in Charleston, South Carolina, and the other born here in Milwaukee. Marge gave me the recipe shortly after we were married. I’ve made the cake for potluck dinners. Both sons have 2 children each. The one grandchild has also entered into the State Fair, like Grandmother. The Best time to make Dundee Cake is at Christmas because of the candy fruit. It can be made anytime if you get the candy fruit and freeze it, which is what I do

Preheat the oven to 300°. In a bowl, beat together the butter and sugar until very light and fluffy. Add the orange marmalade and the eggs, one at a time, mixing until all is mixed together. Add flour, almonds, baking powder, salt, and spices. Mix in all the candied fruits and the whiskey. Grease and line the bottom of a spring form pan. Spoon in the batter. Smooth the top of the batter and arrange the blanched almonds in a circle on top. Bake 1 1/2 – 2 hours, or until well risen, firm and golden brown. Test cake with a toothpick in the center. When it comes out clean, the cake is done. Cool in the pan for 10 minutes. Remove from pan and coolon a wire rack. Store in an airtight container. Eat within 4-5 days. Makes 1 Enjoy!