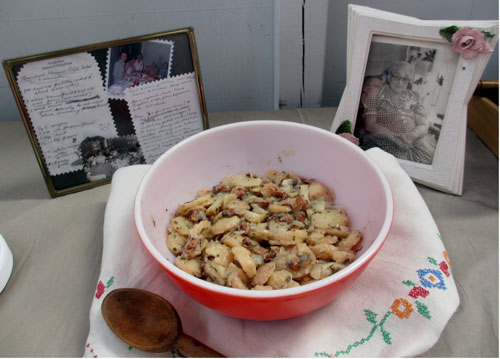 Although I was young, I remember my Great-Grandma well. My Mom, Sister and I, lived in the basement flat, my Grandparents on the first floor and Great-Grandma, Upstairs Grandma we called her, lived on the 2nd floor of the Chicago 2-Flat Home.

Great-Grandma was born Magdalena E. Hackemer on November 10,1872 in Jersey City, Hudson, New Jersey. Her Father, Johann Hackemer ,was born in Germany in 1847 and immigrated to the US in 1867. Her Mother, Magdalena Busch, was born in Bas-Rhin, France, where the native language was German. She immigrated to the US in 1869, met Johann and married in 1870 in New Jersey. This is the beginning of how the recipe became part of our family.

They moved to Chicago where Great-Grandma met and married Eugene Gisselbrect who was also born in Bas-Rhin, France, the same place as her Mother.

She brought the recipe with her and passed it on to her daughters, Selma Emma and Katherine Gisselbrecht. Selma married Otto Neubauer of Austria and had a child, my Mother, Jeanne in 1929. I never met my grandmother Selma, as she died in 1938. My Mother was then raised by her Aunt Katherine, who was married to Ervin Moninger. She was then always considered my Grandmother. And so the recipe was then passed down another generation to my Mother and Aunt.

I have always loved German Potato Salad. We must have had it at all special occasion dinners. I also remember my Mother making it when we were growing up. What I never knew until recently, is that the recipe was never written down, just passed down over the generations by word of mouth and/or demonstrating. It was never passed down to my generation. I remember every time I took my Mother to a deli, she would buy some German Potato Salad and rate it.

A few years ago, Mom in her 80’s, had the foresight of writing down the recipe so it would not be lost. It looks as if she was writing it as she made it, as she remembered it, so she could get the ingredients accurate for us. Mom recently passed away from complications of a long 30 plus year fight with Myasthenia Gravis. It was after that when we discovered this recipe that we have grown up with. I hope that I can do the same justice with the recipe and then pass it on to my own Daughter.

Salome Jehl and Laurent Gisselbrecht were married on 27 Dec 1871 in Baldenheim, Bas-Rhin, France.24

GRANDMA’S GERMAN POTATO SALAD AS I REMEMBER
(recreated by Jeanne Schultheis)
Jill Jackson, Grayslake, Illinois
2 Lbs of Small Red Potatoes
8 Slices of Bacon
I Medium Onion
IT. Parsley Flakes
1/2 C Sugar
3 T. All Purpose Flour
2 tsp. Salt
3/4 tsp. Pepper
1/4 C Bacon Fat
I C White Vinegar
I C Water (from the potatoes boiling in)
Bring potatoes to a boil, then simmer for 20 minutes or until a fork can gently pierce them. In the meantime, fry the bacon until just crisp and cut into small pieces (not minced). Dice and fry the onion in the bacon grease, slowly, so they do not burn. Set aside 1 C of the potato water and 1/4 C bacon fat.
Peel and slice the potatoes, place into a large bowl. Add the parsley flakes, bacon and onions. Keep warm.
In a separate bowl, blend together sugar, flour, salt and pepper. Set aside.
In a saucepan combine the bacon fat, vinegar and potato water. Bring to a boil. Slowly add the flour mixture, stirring well between additions. Boil 2-3 minutes, until mixture is thickened, stirring constantly to avoid and break up any lumps.
When thickened, remove from heat and pour over potato mixture, just enough to cover, and toss gently. Some sauce will be leftover.
Best to serve when warm, but cold leftovers are also great for a lunchtime addition!