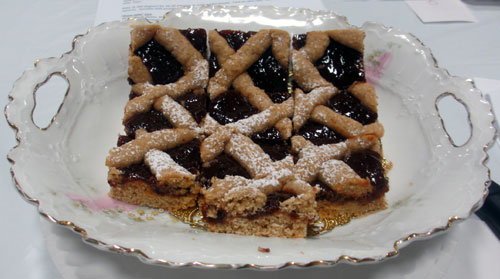 Where did the name “Plum Jelly Squares” come from? I remember life back in the 1950’s when I was growing up. My family lived “upstairs” in a duplex owned by my grandparents. My grandma Anna would bake, sending wonderful smells upstairs. My two brothers and I would try to venture down to taste Grandma’s creations. One treat we always enjoyed was a delicious European dessert that didn’t have an American name. My Grandma Anna (B.) (my mom’s mom) got the recipe from my dad’s mom {also named Grandma Anna (P.) who got it from a friend. Grandma Anna B. explained that this dessert was made with a kind of “jelly” made from plums. The dessert was made in pans and cut into bars for serving. At the time, that information was not too interesting for 3 young boys, but it did help my brothers and I to come up with an easy to pronounce English name for the treat. We began calling the treat “Plum Jelly Squares”, and to this day that is what it is called. My mom cannot even remember what the actual European name may have been, since any copies of the recipes since the 1950’s have all been named “Plum Jelly Squares”.

This recipe has been in my family since before my parents were married in 1951, since my dad’s family came to Cudahy in the early 1920’s. Some ofthe original ingredients may have changes (using lard or Crisco or margarine or butter) but this recipe has been handed down from my Grandmother to my Mom and to all three of us sons. I am continuing this tradition by passing this recipe (and others) down to my three daughters (age 20, 18, and 8) who all are entering some items for judging in the State Fair this year!

This recipe is great at family get-togethers because it won’t deteriorate in the heat of a summer picnic, and is “finger food”, easy to eat at family reunions, etc. It can be made at any time of the year, since it uses the “plum jelly” that is canned and available anytime. The filling used in this recipe was originally created using fresh plums from the big European Plum tree in my Grandma Anna (B.)’s back yard. I remember my mom and dad using the step ladder to pick all the plums. Grandma and mom would wash and pit them plums and cook them in a large Nesco roaster with some sugar for what seemed like all day to get the plums to turn into the jam called “povidla”. That jam was canned in jars for use throughout the year. That tradition continues with my mom and my family using the plums from my mom’s backyard (after we moved into our parent’s own home in 1964, and she started a plum tree from a graft of the tree at Grandma Anna’s house).

It is important to carry these heirloom recipes to the next generation. Thank you for the opportunity to share my Favorite Family Heirloom Recipe! I hope you enjoy my dessert!

Preheat oven to 350 degrees. Combine butter and margarine in a large mixing bowl. Beat at high speed until creamy. Add eggs and egg yolks one at a time, beating until combined.

With the remaining dough, roll into “logs” about 1/4 inch thick. Create a lattice over the “Plum Jelly” layer.

Bake at 350 degrees for 26-30 minutes or until golden brown. Cool on wire rack. Cut into squares. Sprinkle with powder sugar.

“Plum Jelly” Jam
16 Ibs. fresh plums, washed and pitted
9-10 cups granulated sugar
Place a portion of the washed and pitted plums in a blender and blend until pureed. Repeat until all are pureed. Place pureed plums in a large pot. Bring to a boil and cook over low heat stirring often until plums have cooked down to 1/2 of the original volume. Add sugar, stir until dissolved, and continue cooking, stirring often until the jam is thick. This could take 6-8 hours. Remove from heat. Ladle into prepared canning jars, adjust lids, and process in hot water bath canner for 15 minutes. Remove from canner. Let cool. Can be stored for a year. Yield: 6 pints.