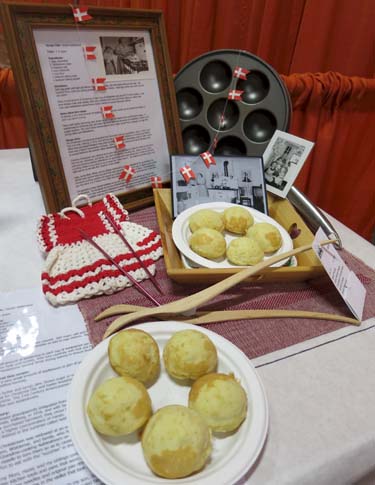 My Christensen grandparents emigrated from Denmark, first my grandfather, Jens, in 1901, and then his bride, Valborg, in 1916, and with her came the Danish traditions of cooking and baking. When they purchased fannland, they chose to settle in southwest Minnesota, close to Tyler, where there was a higher concentration of Danes. Tyler continues to embrace its Danish heritage with an annual festival in the summer called Aebieskiver Days.

Grandma Christensen was widowed at an early age and continued to make her home on the farm with her son, Waldemar, and family, who had five children, including me. When I was a child, watching Grandma cooking Aebleskivers on special occasions was always such a treat as she used a knitting needle to tum them so as to cause less “disturbance”. The delicious pancake pastry was light and fun to eat with the “surprise” in the middle.

Later, as my Mom, Hazel, and my siblings continued to prepare Aebieskiver for our families, we utilized other kitchen tools and pans that were designed to be used on gas or electric stoves unlike Grandma’s knitting needles and original pan designed for use on a cook stove. The Aebieskiver pan has either 9 or 7 holes in the skillet that look like small round cups about the size of golf balls. I’ve passed on many Danish traditions to my son, John, including the skill of cooking his own Aebleskivers. He has joined me and our extended family several times in attending the summer celebration in Tyler and enjoying Aebleskivers baked and served throughout the festivities. It is a wonderful tradition and one I’m thrilled to continue. I’m proud of our Danish heritage.

Yield: 2 1/2 dozen
Ingredients:
3 eggs, separated
2 Tablespoons sugar
1/2 teaspoon salt
2 cups buttermilk
2 cups flour
1 teaspoon baking soda
1 teaspoon baking powder
Directions:
Beat egg yolks until light and lemon colored. Add sugar, salt and buttemilk and mix well. Sift together flour, soda and baking powder to add to egg mixture. Beat egg whites until stiff and fold into batter.
Place a small amount of shortening in each cup of Aebieskiver pan and fill 2/3 full of batter. Cook over medium heat until bubbly, then turn carefully with fork and finish baking on other side. Turn each Aebieskiver several times during baking to ensure thorough baking.
Notes about this recipe:
If desired, a very small amount of applesauce or jam of your choice can be placed into batter in each cup before turning.
Serve with butter and syrup, jam, brown sugar or sprinkle lightly with confectioner’s sugar. A special treat for Christmas Day and Easter breakfast but may be served as breakfast, a snack or for supper anytime. The 21st Century Americanized menu might include fruit, sausage, an egg dish, strong coffee and Aebleskivers.