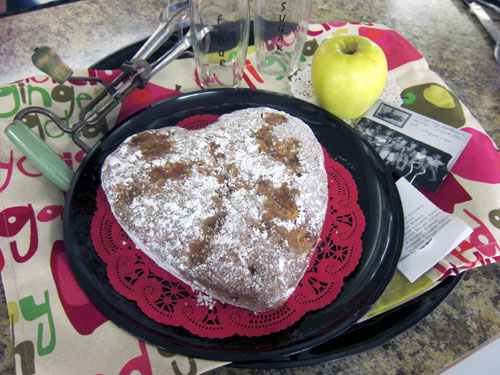 My mother, being the first person in her family born in America, was always somewhat of a pioneer. She loved to cook, sew, and knit.. . really and truly enjoying the family arts. She was born in 1927 in Western New York State, where her parents and two brothers had settled after arriving on Ellis Island from Sweden in the early 1920’s. She was raised in tbat little town where she met my father, who was attending college there. My parents were married in 1950 and lived there until after my two older sisters were born. My father was offered a job as a bank auditor in Indiana and so began their migration to the Midwest, first to Indiana, then Ohio, back to Indiana, then Illinois, Michigan and finally back for a third time, to Indiana.

My mother did not drive when she was first married and I was due to be born in South Bend in the cold snowy month of February. My father’s new job took him all over the state and so my parents decided that my mother would go back to my grandparents’ home along with my sisters for my birth at the hospital where my sisters were born and then return to South Bend when I was six weeks old. Our family continued to grow through all of those moves and in addition to my 2 older sisters, I was blessed with 4 brothers and 6 more sisters … 13 children in all!

Very often on a Sunday afternoon, our large family would pile into our big station wagon and go for a ride. There were no seat belts or car seats during that time. I can’t even recall ever traveling on an interstate. The baby would be up front with my parents, the three oldest girls usually sat in the middle of the car holding 3 younger children, while the remaining 6 children all sat in the back. We always thought it was comical, when we were at a stop light, to see people counting all the children in our car. We would visit a park, or sometimes an Amish cheese store, but more often than not, we ended up driving in the country to a local apple orchard.

Our whole family loved apples! In a couple of our houses, we had a fruit cellar which enabled us to keep apples for a long time. My mother had 3 fabulous apple recipes. They were for apple crisp, apple kuchen, and apple cake. The recipe for this apple cake is an old one which my mother received from a school friend’s mother of one of us kids. It quickly became very popular with oOr family as it was easy to make and everyone liked it. The recipe is a simple one with no special ingredients and does not even require any frosting, only powdered sugar to add a little sweetness. My mother could put it in the oven as we were having our supper and it was ready to eat by the time the meal was ending.

My mother would often make this cake to take to relatives when we visited my cousins in Ohio, Pennsylvania, and New York. My mother would always bake it in her 9×13 aluminum cake pan. I began making this cake for my husband shortly after we were married in 1987 for his birthday cake as he isn’t very fond of a lot of frosting. Sometimes I would make it in a Bundt pan or in a special shaped pan. I have also been baking this cake to take to funeral meals as it was easy to transport, could be cut in several small pieces to accommodate a large crowd and really would taste better with each passing day as the moisture from the apples would keep it as fresh as the day it was baked.

All of my mother’s recipes were from scratch. Our meals were home cooked and we all sat down at one table for supper and ate together. Lively discussions ensued around the supper table with my father engaging each child in conversation, so no one would feel left out. My mother took great pride in her cooking and baking, with meals not only tasting wonderful, but looking that way as well. I can hardly remember a time when she did not serve dessert, even if it was just some home canned peaches from my grandmother.

I have been making this cake for over 30 years now and the aroma of cinnamon and fresh apples baking in the oven is still a very comforting smell to me. To this day, it reminds me of my childhood and all of my siblings and those home cooked meals lovingly made for all of us by our mother.

Here is the recipe, just as it was when my mother received it so long ago.

Preheat oven to 350 degrees. Grease and flour a 9×13 cake pan. Beat together sugar and eggs. Add oil and beat. Sift together flour, soda, salt and cinnamon. Fold in dry ingredients. Add apples and nuts. Spread batter (it will be thick) in prepared cake pan. Bake for 35-45 minutes. Insert toothpick in center to test for doneness. Cool. Sprinkle with powdered sugar. Cut in desired sized pieces.