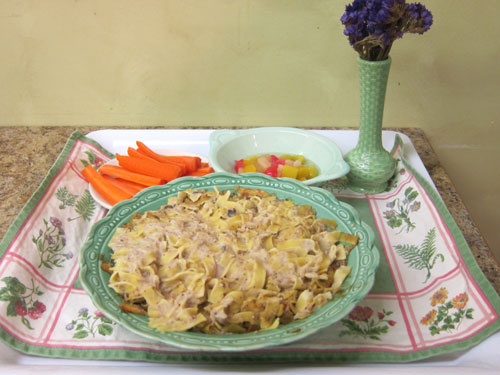 I never took home economics in school, probably due to the fact that I attended four different high schools in three different states and most likely missed the years it was being offered as I moved from state to state with my family. My mother is the person who taught me to bake, cook, and sew. She was my example for much of my life.

Her parents came to America from Sweden in the early 1920’s and settled near Jamestown, New York. My mother and father moved to the Midwest when they were married in 1950 and remained in the Midwest all of their lives, living in Ohio, Indiana, Illinois, and Michigan.

I cannot recall a dish that my mother made that was not pleasing to the eyes as well as the palate. When I saw the theme for this year’s Heirloom Recipe Contest, I was a little perplexed. However, I read a little more and felt I had a good understanding of what was required although I did have to search long and hard to find something that fit the category.

This basic recipe served a family of 4 however, with our family of 15 my mother would quadruple the recipe and bake it in a large roasting pan. My mother was always very careful to flake the tuna fish as no one wanted to get a large chunk in their serving. I know many cooks include peas and even pimentos with this particular dish, however my mother did not. I am sure it was due to the fact that there were some picky eaters in our family who didn’t like things all mixed together.

My mother always tried to please everyone when she was cooking. She would most often serve raw vegetables with a casserole such as this, which would have included green peppers, celery sticks, carrot sticks, cucumbers, and/or radishes. There was never a meal served that didn’t include some type of dessert, even if it was as simple as canned fruit cocktail. I recall my mother being so careful to make sure that each of us had at least one cherry in our bowl.

A few years ago my sisters and I were exchanging emails in which we were discussing recipes. One of them mentioned Panko Bread Crumbs and I told her that I had never used them before. She said to me, “Oh, you must try them, they will change your life!” At the time, I thought it was hilarious to hear her make that statement. How could bread crumbs possibly change my life? However, I have since tried them and now I know exactly what she was talking about.

My mother never made a topping for her Tuna Noodle Casserole. After discovering the wonderful flavor of Panko Bread Crumbs, I have started to make a topping for several of my casseroles using the bread crumbs and butter and sometimes adding shredded cheese. Although the dish I made today is just like the one my mother used to make back in 1950, I think if I add the Panko Bread Crumb topping, my mother’s Tuna Noodle Casserole might just be fancy enough to finally serve to guests!

Preheat oven to 350 degrees. Boil noodles in large pot with salted water on the stovetop. Drain and place in a large bowl. Add remaining ingredients and mix well. Place in a 2 – 3 quart casserole dish and bake at 350 degrees until top is brown, approximately 30 minutes. Makes 4 servings.