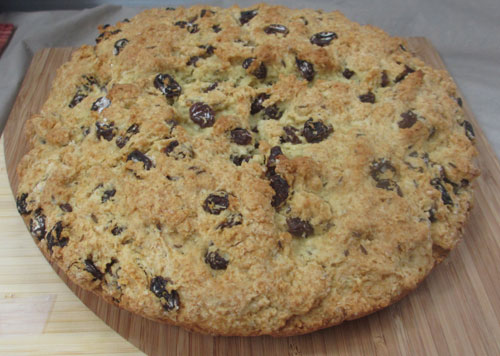 This recipe has been part of my Irish heritage for over 90 years.

On August 5, 1922 my mother, Alice Kenny, departed County Leitrim Ireland at the age of five with her parents and three siblings. After an eight-day crossing, they arrived aboard the SS Belgic at the port of New York.

Growing up in Rye, New York I can remember watching my grandmother and mom prepare this humble recipe in our welcoming kitchen. After all the dry and wet ingredients were stirred together and combined, they placed the dough in a cast iron skillet. My mom would make a cross mark on top of the loaf ­a decoration symbolizing our Catholic roots.

After it was baked, we would sit together at the kitchen table and savor each slice with a pot of tea. My grandmother especially loved this tradition and made sure it would be continued in America.

It is now a custom that I have come to treasure. To this day, I enjoy having a cup of tea and Irish soda bread with my daughter.

4 cups of all purpose flour