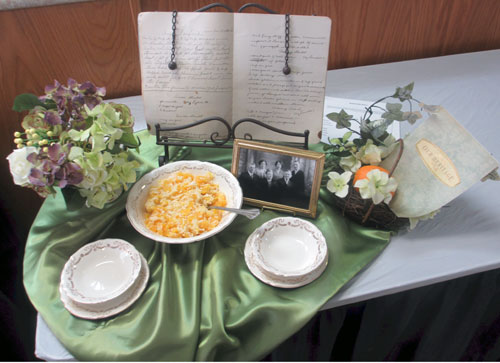 This recipe was found in a handwritten notebook my Great grandma Linn started to fill with what I presume were her favorite recipes. It’s grouped into sections separated by blank pages. Topics included salads, cookies, lots of cakes, another whole section on cake fillings, and fritters. The back cover has a recipe called “Persian Cream of Complexion” and one for buttermilk as a cosmetic! There are a couple of pages close to the front painted by what looks like a child painting with water colors. I assume since it was left in the book, it was the work of a grandchild. If this is the case, my uncle Carl or his cousin Gordon would have been the artist. Great grandma died shortly after my dad’s 1st birthday 80 years ago so he could not have been the artist. I also assume the book had remained in such good condition because it was made for my grandmother by my great grandma, with maybe only one other copy going to my grandmother’s sister Hester.

It wasn’t until I expressed an interest in the heirloom recipe contest that my mom gave me this book. And it wasn’t until I was looking through it for contest possibilities that we discovered this recipe for the dish she’d been making for years. It had always just been something my dad liked so she fixed it. I think it’s funny that we call it Grandma Linn’s recipe but in the book it clearly came from her friend Louise, whoever Louise was!

I remember eating this dish as a kid for breakfast. I always thought it was just a clever way for my mom to get rid of the last of the case of FFA oranges, which the local FFA organization had sold as a fund raiser. They would generally be delivered shortly after Thanksgiving. A case of oranges was about 40 oranges. Upon arrival this didn’t seem like that many, but by time we were getting to the bottom of the box, they were not so exciting. Then creative methods were necessary to encourage consumption.

I like to imagine Louise and Great-grandma probably fixed this dish most often in the 1920’s or earlier, as she died in 1934. It might have been considered a little decadent thing since neither oranges nor coconut can be grown here in SD. Great-grandma lived in Rockham, SD, an almost forgotten town on the Hand/Faulk county line. While there, she lived for a while the life of a banker’s wife. I imaged great­grandma and Louise having an afternoon tea party probably sometime after Christmas with the neighborhood ladies. I chose after Christmas, because I remember my dad telling how great it was to get oranges in their Christmas stocking, since that was about the only time they were available.

When I was a kid, oranges were available longer than the Christmas season but the quality of product decreased. Nowadays, my grandchildren enjoy good oranges whenever they want thanks to modern refrigeration and global transportation.

Besides being an old recipe, this recipe uses ingredients with very old histories. Oranges are believed to have been first grown in ancient China over 4000 years ago. Then came the age of exploration and European explores took them all over the world. One story has the famous Spanish explorer Ponce de Leon bringing orange along to America in the 16th century, ~o oranges have been growing in Florida for several centuries. Spanish missionaries are credited with starting orange groves in California in the 18th century. And in the 19th century oranges were started in Texas. These three states remain the US’s top producers of oranges.

Oranges are classified into two general categories-sweet and bitter. Popular varieties of the sweet orange (Citrus sinensis) include Valencia, Navel and Jaffa, as well as the blood orange. Bitter oranges (Citrus aurantium) are oftentimes used to make jam or marmalade, and their zest serves as the flavoring for liqueurs such as Grand Marnier and Cointreau.

Oranges are loaded with health benefits. They are an excellent source of Vitamin C, which is vital for the proper function of the immune system. Oranges also contain vitamin Bl, folate, vitamin A, calcium, copper, and potassium. Oranges are being found to help in the protection against rheumatoid arthritis, protect respiratory health, prevent ulcers, reduce the risk of stomach cancer, prevent kidney stones, serve as a good source of fiber, have possible cholesterol-lowering benefits, protect against cardiovascular disease and help reduce risk of colon cancer.

Coconut, the other main ingredient in this recipe, has been around so long its origin has been lost to history. The word coconut was first mentioned in English print in 1555, telling of Portuguese sailors who thought the 3 small holes on the coconut shell resembled the human face so they dubbed it “coco” meaning “grinning face, grimace or hobgoblin”. The word nut was added in English later on.

Technically the coconut is not a nut, but rather a drupe. Other drupes include peaches, plums, and cherries. It does not grow on a tree either because the plant doesn’t have bark, branches or secondary growth. A coconut palm is a woody perennial monocotyledon, with the trunk being the stem. Hawaii and southern Florida are only states in the US that coconut palms can be grown in and reproduced outdoors without irrigation. 80 other countries grow coconut palms but Hawaii is about as far north as they will grow. The top 3 coconut producing countries in 2010 were the Philippines, Indonesia and India.

Coconut palms are nicknamed “tree of life” because every bit can be used. Coconut water, which is produced in the early stages of growth and is not the same as coconut milk, was used during World War II in tropical areas for emergency blood transfusions. The leaves are used for making brooms, woven to make baskets or mats, or dried and used as thatch for roofing. The fiber of the husk, or coir, is used for ropes, mats, brushes, sacks, caulking for boats, and as stuffing for mattresses. Wood from the trunk was traditionally used to build bridges, houses, huts and boats in the tropics. And then there is the “coconut” seed or the white, fleshy part called the meat. Copra is the term used for the dried meat. This can be processed to produce coconut oil, which can be used in cooking, soaps, cosmetics, hair-oil and massage oil. Coconut meat is high in manganese, potassium and copper. It can be used fresh or dried in cooking and baking.

I found it interesting that in Thailand and Malaysia, trained pig-tailed macaques are used to harvest coconuts. In fact, there are still training schools for these monkeys in parts of the countries and each year competitions are held to find the fastest harvester.

I also learned while researching for this project that shredded coconut used to be sold in a can. So great grandma linn probably got hers in a can instead the plastic bag I get mine in. While the times have changed and this this dish could have once been considered a luxury item, it is remains popular in our family because of its high nutritional value and ease of preparation. 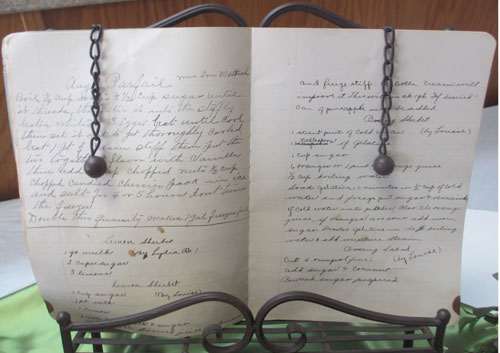 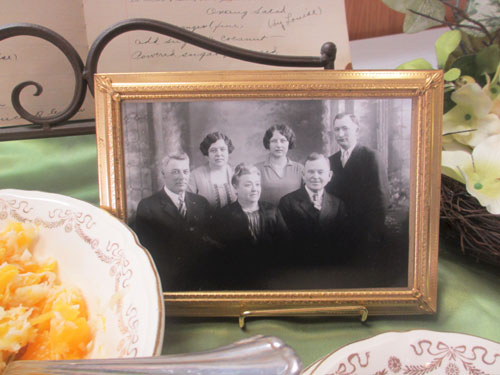