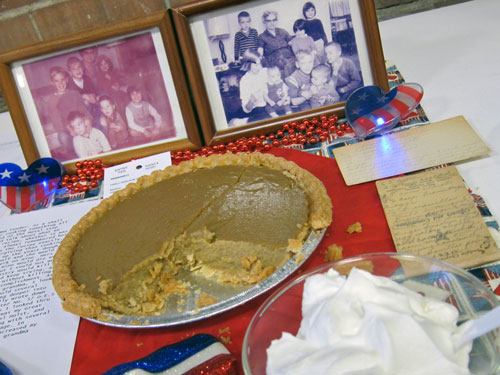 This recipe came from my Grandma Fender. As a small child I can always remember her cooking something all the time, she would let me stand on the metal step stool right beside her. We would talk about what we were doing all the way thru the recipe, whether it was cooking dinner or baking. I have always remembered her telling me baking you must follow the recipe exactly, she would say baking is more unforgiving than cooking. This I learned when she would mix up the yeast dough for rolls, we would divide it in half and she would knead and roll hers, and I would work on mine. Hers would do as it was suppose to, and mine would die every time. It took us awhile to figure out I could not work with yeast, as something in my chemistry would kill it every time. But as time went we would keep trying, as a young adult, I could finally work it without killing the yeast, we both rejoiced in our accomplishment. As I was given her recipe box when we lost grandma, I looked thru it and found this recipe, which hold several special memories for me. Then in digging deeper into the box, I found where she had originally wrote down the recipe which is on the Sedalia chapter No. 57 O.E.S 1933 officers and committees booklet. As I looked thru the booklet I noticed the worthy Matron was my Great Grandma Holst, the Ester was my Aunt Hazel Holst, and my Great Grandpa Holst was a Lantern Along with several other names that are related now by marriage. In finding all of these treasures has just increased my love for cooking and baking that my loving grandma spent so much time in teaching me.

Garnish with Cool Whip if desired