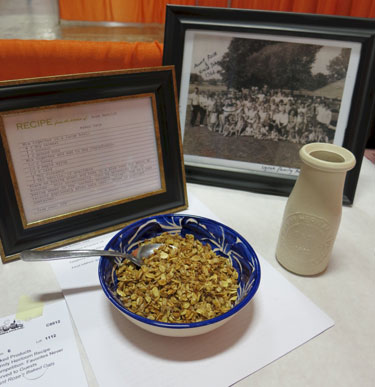 I n 1894, Joseph Lynch and Mary Jane McElhaney were marri e d and over the next 18 years brought ten children into the world. All five sons joined their fatehr in the farming business  when they became of age – some as young as eight years old. Their days began a t 5:00 am, 365 days a year, and didn’t end until the second milking was finished

The oldest , Mary Eellen, was my grandmother. The youngest. Rose, died in 2012 at the age of 100. Both became nurses and worked their entire adult lives, a phenomenon uncommon in their day.

Rose was born without a voice box and could not speak. When she was 12 years old, Mary E l l e n saved enough money f o r pay for life changing surgery and Rose not only said her first words but the entire town heard her cries of joy.

Growing up Rose was anotherwise happy and happy child . She became an accomplished baker as supplies were abundant in their small town of Rosebush, Michigan. Four generations loved her delicious Christmas cookies, in addition to the strudel, coffee cake, and pies she made from scratch.

One recipe we were not familiar with until a few years ago was that of Baked Oats . Every morning at 9:00 am a second breakfast was served in the barn. It was Rose’s job to prepare this meal. Oatmeal was always popular in the winter. In the summer, however, warm temperatures were not compatible with hot food. At age 13 Rose began testing different methods of preparing the oats which were harvested from their land. She used the ingredients of vanilla, cinnamon, and lard from an oatmeal cookie recipe and combined them with honey and maple syrup often used as sweetners in the oatmeal. Rather than boiling the oats , she placed them in the oven and presented a crisp but chewy alternative. Her dad and brothers savored this treat with fresh milk. During the fruit harvest, raspberries, blueberries and baked apples were added to thiss midmorning snack. She also added nuts and raisins when they were available.

Aunt Rose was married in 1947 to Mr. John Bedrick who she met through the church bowling league i n Detroit. She said her game declined dramatically when she met the team’s newest member. Not only was she distracted , she did not want to intimidate him. Aunt Rose and Uncle John traveled to Hawaii for their honeymoon and brought coconuts back for their family, friends, and co-workers. Still perfecting her recipes, she sprinkled some on top of the baked oat s. Uncle John said he loved the taste and texture combination. A few weeks l a t e r my grandfatherr brought Rose a bag of coconut flakes which were a new product available at the A&P grocery store. My grandfatherr was a butcherr at A&P and he always arrived with new and unusual gifts for our family from the grocery store. This was the perfect addition to Aunt Rose’s Baked Oats and was then noted as a standard ingredients in her recipe. At age 85, a year after Uncle John died. Aunt Rose moved to an assisted living facility. She was the Wii Bowling Champion in both 2008 and 2009.  In 2010 when her greatt – great niece married, she shared her recipes for the first time, contributing to the family cookbook assembled as a wedding gift. She talked about how much she loved to bake when she was younger. She also admitted that not all of her attempts were edible. She learned early in life the skills of doubling recipes and supplementing with fillers . She said the worst “experiment” was when she tripled the amount of baking powder in a batch of of cookies hoping to triple to output. With a smile on her face she s a i d , “They were awful. My family played cards that evening and the loser of each round had to eat one of these cookies.”

Aunt Rose was beloved by all her knew her and remains a legend in our family for the recipes and stories she left behind.

Mix together in a large bowl:

Mix together and add to dry ingredients:

Place on baking sheet and bake in a slow oven for about 40 minutes.  Stir occassionally. Cool by arranging flat on baking sheet so the oatmeal becomes “crisp” . Add 1 1/2-2 cups raisins (optional) after oats cool. Store in airtight container.