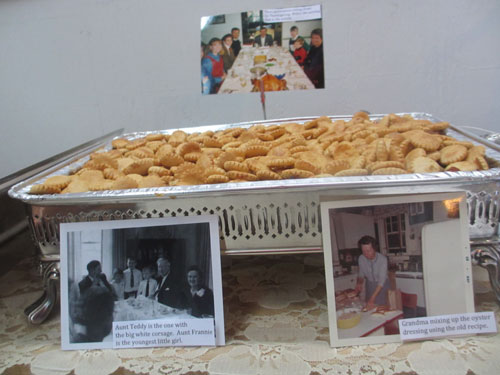 Oyster Dressing… the rest of the story

Like all families, we try to get everyone together at the holidays, especially Thanksgiving. This isn’t always possible since some live so far away, but in order to always keep the same feeling in place, we, like many families, have traditions. Some traditions are good ones; and others, well wonder how they ever started or why we even continue them ….

Some of the better traditions at Thanksgiving is everyone at the table sharing one thing they are thankful for, either something that has happened in the last year, or just thankful in general. Another tradition is we always take a family portrait, err portraits ….. from every angle, from each end ofthe table, from each side of the table, etc, etc, etc. And of course, the photos cannot take place until ALL the food is on the table. Which leads to the not so better traditions ….

Taking pictures only after all the food is on the table; you know, the food that is supposed to be served warm, or even cold; because by the time the pictures are done, everything is all the same temperature. The other not to good tradition is you have to take at least a tablespoon of everything – even the foods you don’t like. Even the oyster dressing – yuck! And while we are on the bad traditions, why would you ask do we even serve the oyster dressing anymore, well that is an interesting story …

Along about five generations ago, the matriarch of the family was Aunt Teddy. Aunt Teddy had a love all things seafood; lobsters, clams, shrimp and oysters. Back then, around the 1900s, oysters could only be purchased around the holidays in 5-gallon wooden barrels. Folks would stop by the butcher, tell him how many they needed and he would scoop them out, throw them in butcher’s paper and on home they went for the holiday feasts. Well, Aunt Teddy was such a lover of oyster, her brother would buy her one of these barrels and she’d pop the lid off, and scoop out these little pearls of “yumminess” and slurp them down. Now, one can only eat so many oysters, so they had to come up with something to do with the leftovers, hence the oyster dressing that was served at Thanksgiving, & Christmas, and every meal in between I imagine!

The really odd thing about this tradition is there is only one person in every generation that even likes the oyster dressing! Which begs the question, why do we serve a dish that only one person likes? Maybe it has something to do with “who” that oyster dressing lover is …. Aunt Teddy was the matriarch; and with the next generation, the oyster dressing fan was Aunt Lena. Although not necessarily the matriarch, she was the old spinster and you know how demanding they can be! And just like aunt Teddy she would pop the lid off the barrel, and scoop out those slimy, smelly little things and eat them raw & warm. And NO ONE was allowed to take his or her helping of oyster dressing until AFTER Aunt Lena has taken her portion (like we would!!!).

The next generation, my dad’s generation, the oyster fanatic was his sister, my Aunt Frannie. She was another lid popper, oyster scooping, raw eating fan …. I remember asking my dad what in the world she was doing on the back porch bent over a dirty old barrel, I mean she was a well-respected doctor, but you wouldn’t have known it seeing her trying to grab the slippery little devils. But, that is what an oyster apparently does to a person – you are reduced to a cavewomen like being hovering over your barrel, ready to defend it from all others. Luckily, with this generation the oyster dressing took a dramatic turn for the better with the addition of oyster crackers on top and cream. Now, everyone had to opportunity to “take their tablespoon” from the cracker topping instead of having to eat any of the oysters. The only problem was if by the time it came around to you, if all the cracker topping was gone, well, you were stuck taking an oyster and trying to choke it down.

For my generation, the oyster lover seems to be my cousin Anne; and the oyster no longer come in the oh-so-unsanitary barrels, but a nice plastic container from the deli. For those us who tend to sit at the end of the table, well, we’ve learned the art of pretending to take a helping of every item passed without really taking some. Believe me, I’ve earned a pass having to eat my share of oysters in the past ….

As far as the current generation, well no one has truly emerged as the oyster lover as of yet; but we do seem to have a large contingency of oyster cracker fans. So, as we use the traditional serving pan, we’ve started to reduce the number of oyster and to add more crackers. Sadly, the original pan that was inserted into the serving dish met its demise before my generation came along, hence the use of the aluminum pan …. Although I think they started using it to make it easier to throw out the uneaten dressing! So, we continue the tradition of the aluminum pan, and the oyster crackers, and the addition of the cream. I hope you enjoy my version … and if you dig in deep, you’ll find one of those slimy little suckers that only the end table has the “privilege” of enjoying.

Oyster Dressing… the rest of the story

2 sleeves of crackers (we think it means saltines)

Using a rolling pin or a bottle smash the crackers. (No mention on how much, small bits, medium bits, nothing). Then crush the hot dog buns, but not as small as the crackers.

Clean the oysters (again, no instructions) reserving the juice.

In the baking pan, place a layer of crackers, then pats of butter; throw in a handful of buns, half of the oysters and 1/3 of the cream and oyster juice. Add another layer and finish with oyster crackers and remaining cream/oyster juice poured over the top.

Heat the oil in a large skillet over medium-high heat. Add celery and onion; cook and stir until tender, about 5 minutes. Mix in the breadcrumbs and parsley and remove from the heat. Add the oysters and eggs, and season with salt, pepper, poultry seasoning and thyme. Stir in enough liquid from the oysters to moisten and mix everything thoroughly. Transfer to the casserole dish.

Bake in the preheated oven until the top is toasted and a knife inserted into the center comes out clean, about 45 minutes.