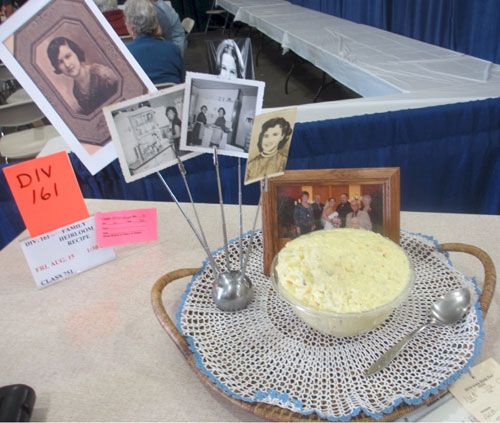 In 1953 there was a young girl in search of her first job. She was lucky enough to come across a dishwashing position available at the local cafe in town and she could not have been happier! She was all of 16 years old and didn’t know much about the cookin’ world but they were paying 39 cents an hour and she could learn how to do anything.

That young woman was my Grandma, or Grams as I like to call her, and this is the story of the “Potato Salad Secret Family Recipe.” The head cook at the time back in 1953 at that cafe was a lovely lady by the name of Florence James. She cooked everything from home-made beef and noodles to pies and she was very good at it. Grams was just a dish washer and a runner at the cafe but one day Florence told Grams it was time to make potato salad.

Grams had no idea how to make potato salad and she told Florence that. “Well,” Florence said, “There is only one way to learn and today is going to be the day!” They started out with a big steel dishpan and started cutting potatoes and then adding a dash of this and a pinch of that until Florence asked Grams if it tasted right. She of course had no idea if it did or not because she didn’t know what “right” was supposed to taste like. But, Florence had been making this special potato salad for her family for many years prior and had a pretty good idea what was “right”.

Well it turns out that Florence had a son that sure would be perfect for Grams. And wouldn’t you just know that said son is my Gramps. This November they will be celebrating their 60th wedding anniversary! Yes it turns out that Florence actually was Grams’ future mother-in­law. She taught her a lot about cooking over the years. My great-grandma Florence passed away at the amazing age of 97 and was one of the best cooks I had the privilege of knowing.

I remember as a little girl growing up that I couldn’t wait to learn how to make Grams’ Potato Salad. It was like a magical food or something. She brought it to most family functions and when she asked any of us kids what we wanted at Christmas dinner, the answer was always “potato salad”. Grams even made a HUGE batch of it for my wedding reception to serve our 300+ guests because I love it so much and I won’t eat any other.

Now that I have a son of my own, I can’t wait to teach him how to cook. He is only two years old but loves “helping” in the kitchen as much as possible. My husband especially likes it when I am working on perfecting my “Potato Salad Secret Family Recipe” because that means he gets to taste test it! There are some times that I still have to call Grams and ask what I am doing wrong because it isn’t working out and she will always ask me, “Does it taste right?”

Oh and by the way, the reason it is so secret is because there really is no secret. You just have to know what the “original” one tasted like to have something to compare it to when you are making it. Just make it taste right!

Grate eggs, onions and pickles into a large bowl. Dice potatoes into that mixture. Add salt, pepper, sugar, vinegar and mustard. Mix all ingredients and add Miracle Whip dressing at the end.  Mix all very well and teate until it is “right.”  Refrigerate until ready to serve.  Best if made a day ahead of time.