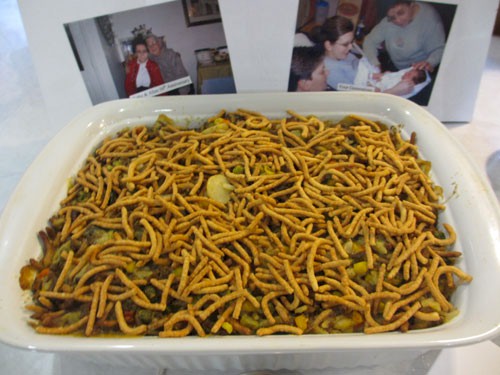 As an eleven year old sixth grader, in 1949, one of my after school duties was to prepare supper for our family.

I learned to be very creative with what I found in the refrigerator and cupboards. Sometimes my creations were well received and other times not so much. One of their favorites and always well received was Maw-Maw’s Hamburger Crunch Stuff.

Now that I’m a Grandmother and Great-grandmother, it has become “Maw-Maw’s Hamburger Crunch Stuff”.

The dish is very easy to prepare and travels well to picnics, potlucks, and family reunions.

Add vegetables and celery. Cook together for 10 minutes.

Add remaining ingredients (do not dilute soups). Add cans of mushrooms if desired.