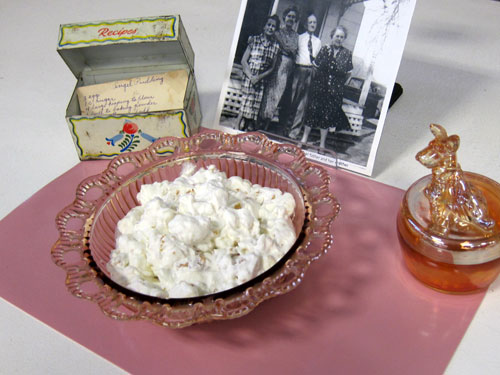 Angel Pudding, the name sounds kind of heavenly. According to the Hunton family for the past five generations it is.

My first taste of Angel Pudding was at a family dinner shortly after my husband and I were married. His nieces and nephew, who were children, went through the line first and took very large servings of Angel Pudding.

I asked what was special about this dish that children would take such a large serving. I was able to get a small serving and then I got the message. It was heavenly on the taste buds.

My sister-in-law explained that the recipe was a family favorite made by our mother-in-law. She died a year before I became part of the family. I nerver got to eat her cooking, but many of her recipes have been kept alive by the family. Before my father-in-law passed away, he gave me my mother-in-Iaw’s recipe box. The box includes the original recipe in her hand writing and I have it on display today. It has no oven temperature or length of time to bake. My sister-in-law supplied that information for me. My mother-in-law wrote to add dates and nuts to the batter, but noted that she always omitted them. However, I have tried the recipe with the dates and nuts and it is equally delicious.

The Angel Pudding is typicaly a dish made for family dinners when there is a crowd as it makes a large quanity. The pink bowl I have served it in today is the original “Angel Pudding Bowl,” that my mother-in-law used. My husband and I inherited the “Angel Pudding Bowl” when my father-in­law passed away.

Angel Pudding remains a true family favorite. I am doing my part to keep the tradition alive by making Angel Pudding for our grandchildren.

Pour onto a greased cookie sheet and bake 15-20 minutes unti browned. Remove from cookie sheet while hot as it will stick when cooled. Crumble into small pieces.

Whip cream and add marshmellows and crumbles a few hours before serving.

Store in refrigerator until serving time.