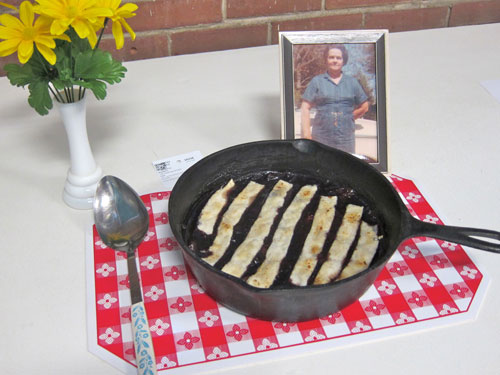 Picture this: The time is the late 1940’s; the setting is a country home in Middle Georgia in mid-July. There in the kitchen is an old wood cook stove my grandmother used to cook for the family. There is no air conditioning or fan to help cool the intense heat of the kitchen. I am standing at the kitchen cabinet and grandmother is teaching me how to roll out pie dough.

In the oven is a blackberry cobbler baking in a large iron skillet. The black berries were picked fresh the day before by my grandmother, my aunt and me.

I can still remember the scratches on my legs from the briars and the bites from what we called “red bugs.” Missourians call them chiggers. My grandmother used some salve on my legs to help stop the itching.

My grandmother did not use written recipes. I learned to cook by repetition and taste. Most of the time there was no real measuring of ingredients; we used a cup and spoons that we drank and ate with. Grandmother was very patient with me and did not mind repeating the process over and over until I could master the task.

The wood cook stove was always tended by my grandmother as it was too dangerous for me as a child. She moved to town in the early 1950’s and purchased an electric stove. That really made a difference in learning to cook. The guess work was gone on cooking at the right temperature.

My grandmother died before she reached 60 years of age. She was diagnosed with cancer and lived only a few months after her diagnosis. I had just graduated as a Registered Nurse and and though it was hard, it was an honor to care for her instead of her caring for me.

The memories of my grandmother are renewed each time I cook one of the family’s favorite recipes.

8 cups fresh blackberries
1/4 cup water
2 cups granulated sugar
2 cups all-purpose flour
1/2 teaspoon salt
3/4 cup lard
6 Tablespoons cold water
Put blackberries and water in a large cast iron skillet. Heat on low until berries release their juice. Add sugar and stir well.
In a bowl combine ftour and salt. Cut lard into mixture with 2 knives until coarse crumbs are formed.
Sprinkle water over mixture a tablespoon at a time until mixture form a ball.
Roll dough out on a well floured board to 1/8 inch thickness. Cut into 1-inch strips and lay on top of berries. Bake in a moderate oven (350°F) until crust is browned. Remove from oven and push crust down into berries. Repeat the process until all the dough is used leaving the crust on top the last time.
Serve warm if possible.
Note: If iron skillet is not available use a deep casserole dish.
10 servings.