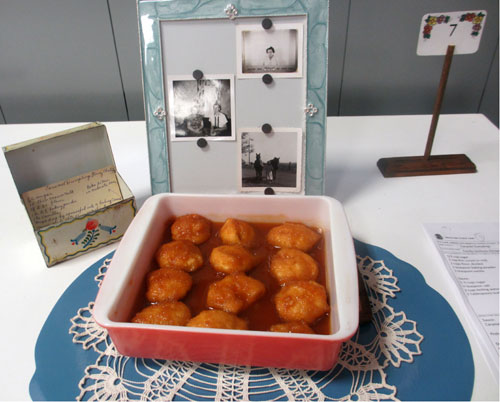 I have never had the experience of having a mother-in-law. I was introduced to my husband by his mother when she was a patient of mine in the hospital. She had cancer and died before we became engaged.

After we were married, my father-in-law gave me her recipe box containing many of the family’s favorites, including the recipe for Caramel Dumplings.

According to my husband the recipe was given to them by their neighbor, Daisy. My husband grew up on a farm. In the 1940’s the farmers had cooperative harvest days when they would go to each other’s farm and help harvest the crops. Daisy would make the caramel dumplings to feed the men when they came to her husband’s farm.

My mother-in-law began making the caramel dumplings for her family because they liked them so much they wanted them more often than just at Daisy’s house.

When I make them my husband says they look and taste just like his mother’s and Daisy’s; I feel really proud. I know my mother-in-law is watching over us when I make one of her recipes and she is thankful that I am carrying on the family traditions.

When I take the caramel dumplings to our family reunions they bring back memories of the days when the older family members lived and work on a farm.

Mix all of the ingredients together using 1-1/2 cups flour; add the remaining 1/2 cup of flour to make a stiff batter. 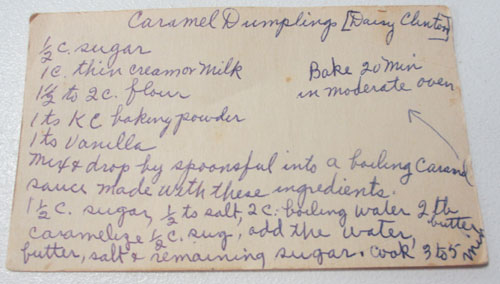