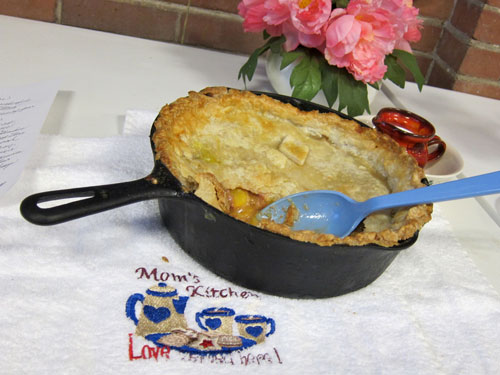 When I think of the wonderful things I baked with my “Mom.”  I think of August being a time of year when peaches were available.

We lived in the rural area of Rettis County and a young orphaned young man would bring my “Mom” peaches and ask her to make a cobbler of them.  “Mom” and I cooked and baked on a wood cook stove and she would always say, He’s such a nice boy, I’ll bake him a cobbler and us one.  I peeled the peaches and she made the crust and put them to bake in a “black skillet.”  She always made a second and used the only pie pan we owned for the young boy.  “Mom” could never turn down a hungry person.  Today, I know she bakes pies in “heaven.”

Wash for top of cobbler

Stir until all is well mixed.

Add a little water, pouring into a iron skillet on bottom crust.  Dot with butter.

Place a top crust with vent holes and brush egg wash – use scrap to decorate.