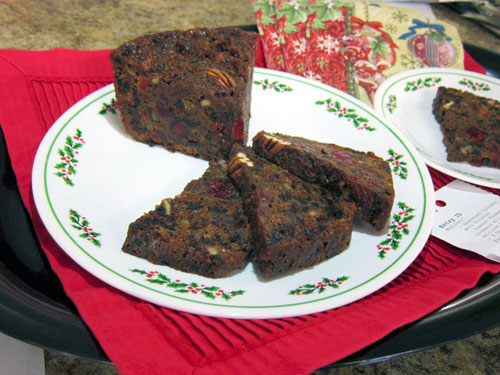 My mother, also Luella, found this recipe in a Watkins Cookbook, published in the late 1940s when she was in high school. She began making this fruitcake the first Christmas after she and my father got married in 1956. By the time I first remember eating it in the late 1960s, she had tinkered with it until it was something of a legend. I am the youngest of the kids, so by the time I was in grade school, all the teachers were quite familiar with my mother’s baking since she was one of the regular ‘room mothers’ that baked for class parties. In particular they eagerly looked forward to the trays of cookies and fruitcake she sent with us before Christmas break each year. It was well known that she baked the fruitcake the weekend of Thanksgiving, so it could mellow for a few weeks … sometimes wrapped in a rum soaked pillowcase. I can remember several times coming back from Thanksgiving, and when the teacher went around the room asking if we had a pleasant holiday, there was a gentle interrogation “Miss Luft, did you and your mother make the fruitcake this weekend?” I have to admit, this led to much confusion on my part when people told the classic fruitcake jokes calling them dry, brick-like doorstops nobody wanted. People loved my mother’s fruitcake. Not just teachers, but grandparents, cousins, neighbors, and friends all looked forward to the fruitcake each year. It was an absolutely amazing, moist, chewy, fruit laden manna that people looked forward to every year. It was the only fruitcake I had ever eaten, so fruitcake jokes made no sense to me. Then I tried a commercially-prepared fruitcake while away at college. Suddenly, the jokes made sense.

I have vivid memories of helping my mother make the fruitcake. She would use brown paper grocery bags, buttered until translucent, to line the pans. From the time I was about 7 years old, my job was to butter the paper that lined the pans, and cut it to fit neatly. My brothers, Duane and Dana, would crack the walnuts and pecans for in the cake, and for all the holiday cookies to be baked in the coming weeks. It was always a fun, noisy, and exciting start to the holiday season.

As my mother aged, I took over production of the yearly fruitcake. It was unthinkable that we would not have the fruitcake for the holidays. My oldest brother, Duane, still asks each Thanksgiving flare you making the fruitcake this weekend?” My own two boys now crack the nuts. We don’t eat as much of it as we did when we were younger and it is passe to send homemade goodies to the teachers, so the fruitcake now lasts long past the holidays. When Duane helped me remodel my kitchen last summer, as we were finishing the ceiling drywall in the wee hours one morning, he (understandably) started grumbling about running out of energy. I told him I had just the thing, and grabbed a festive tin out of the back of the refrigerator. He knew what it was the minute he saw it and yelled “FRUITCAKE, we are saved!” That might have been a bit overly dramatic, but at 2am, after working for about 20 hours, we both happily gobbled big wedges of fruitcake! It powered us for the last 2 hours till we finished the drywall. The fruitcake you see before you was made in that beautiful new kitchen, the remodeling of which was fueled by fruitcake. Oh, and sorry there isn’t a whole cake … Duane visited!

Line pans with parchment paper, and set aside. Separate 6 eggs.

In a very large bowl, combine:

For the batter, cream together:

This will be a very stiff, nearly dough-like batter. Combine with the honey-fruit mixture by hand, working it till it’s evenly mixed. Use a STRONG spoon, I’ve broken many. Do not do this with a stand mixer, it mashes the fruit too much and ruins the texture.

Beat the 6 egg whites until they form stiff peaks. Fold egg whites into the fruit and batter. Do so as gently as possible. Pour batter into the prepared pans. The fruitcake bakes for the first 2 hours in water, so place the loaf pans in a slightly large baking dish, and fill the outer pan with water about halfway up the side of the loaf pan. Bake in the water for 2 hours at 275 degrees. Remove from water, bake for an additional hour at 275 degrees. Pick in the center should come out mostly clean. Cool completely. Should be stored in the refrigerator for at least 2-3 weeks before being eaten, to let the flavor mature. Can be stored wrapped in foil, in a tightly seal container for several months in the refrigerator, or frozen.