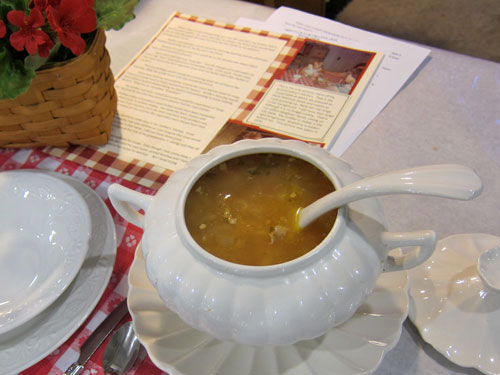 When I was a small child growing up in the 40’s and 50’s, my mother didn’t have her own washer. So, every Saturday my mother, my father and I would load the car with the week’s laundry and drive the two blocks to my paternal grandparent’s home.

Mother and Grandma would spend the morning washing and the afternoon folding and packing the car for the short ride home.

Because Grandma’s attention would be on her laundry she always had a noon meal prepared in advance.

Most often Saturday was “soup day”. Just the thought of it still makes my heart sing. How I loved Grandma’s homemade soup. If she made chicken soup then there would also be a vegetable soup since my father didn’t like chicken in any form.

The soup kettle(s) would already be simmering when we arrived in the morning, filling the whole house with that wonderful aroma.

Come noon time we would gather around the round kitchen table for soup, salad and usually fresh or home canned fruit for dessert. Hardly a Saturday would pass without my grandfather hiding my dessert and pretending to know nothing about it. What fun as I squealed, “Grandpa!”

My brother and sister missed out on this wonderful experience of “soup day” because by the time they were born Mother had her own washer.

Finding a copy of Grandma’s soup recipes would have been impossible because there were no written recipes. She made her beef, chicken and vegetable soups from memory, from the heart and from what produce was available that season (in the summer the vegetables were always from their garden).

I am sure she learned to make soup in her mothers’ kitchen. Great Grandma Caroline Niemiller had nine children so I can imagine that soup would have been a common meal in that home. I did not know those great grandparents, but I did know all but one of my grandmother’s siblings and they all appeared to be well fed.

I have tried in vain to duplicate her soups. Even though I may come close, I will never get it exact because she used her own home canned ketchup and I have never found a ketchup like hers or her recipe for ketchup. But I keep trying .

3. Bring to boil, then reduce heat and simmer until chicken is tender

4. Remove chicken pieces and cool until they can be handled

6. Return meat to broth and add vegetables and seasonings and cook over low heat until vegetables are tender

7. Stir in noodles, increase heat and cook until tender.