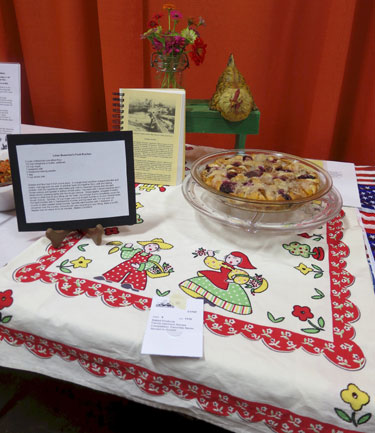 Lilian’s fruit kuchen (German cake) has been a favorite of mine since 1965, especially the

peach and plum combination. My mother became acquainted with Lilian at church. One

Germantown, Wisconsin. She lived in a very big farmhouse just a couple of miles from

our home. Upon entering her home, my sister and I had spotted these kuchens and had

asked her about them. She told us that she had made them for the farm hands (threshing

crew) that day. We knew the only way we were going to taste that yummy looking cake

was to make our own. So that’s when my sister and I asked her for the recipe. My sister

Delores (then 11) copied Lilian’s recipe. I have included my sister’s copy of the original

recipe in my exhibit of which is dated August 1965 the date she copied it. Delores and I

were 4-Her’s and loved to bake and cook. We made the fruit kuchens many times for our

family. It was a quick and easy treat to make and we could use whatever fruit we had on

hand. Our grandmother lived next door and she had the apple, cherry, plum and pear

trees. We had the rhubarb, strawberries and raspberries. Also, we liked the fact that the

recipe made 2 cakes not just 1 with very little ingredients.

parents were Hunsruck German immigrants which created the first commercial

community in 1842, named Dheinsville. Lilian never married and had lived in the big

farmhouse her parents had built and left her. Lilian raised chickens, ducks and geese and

hired farni hands that worked the land. My family lived a mile from Dheinsville on

Maple Road and Lilian lived a mile from Dheinsville on Holy Hill Road. In 1975

Dheinsville became a historical community. The process of restoring the buildings began,

whereby today they are open to tourists. The main attraction is the church which I

buried along with my ancestors on up to and including my parents and Lilian’s too. I have

contains historical recipes and the history of Germantown and Dheinsville.

research on the recipe itself Lihan used a pint Jar to measure the flour. In 1858, an

mason jar. The standardized measuring cup was invented by Fannie Farmer in the year

1896. Then to my surprise oleo margarine which I thought was a 1950’s invention,

actually was originally created from beef tallow and skimmed milk in 1869 in France. In

Commercial oleo margarine was produced between 1900 and 1920. Baking tins were

influence. I am going to conclude that Lilian’s kuchen recipe was passed on from her

parents. I am also submitting a recipe with more precise measurements. Today there is

an apple orchard where Lilian’s house once stood. How ironic. Lots of apple kuchens to

Grease and flour two 9 inch round pans. In a large bowl combine margarine/butter and

cream. Add egg and mix well. In another bowl mix together flour, salt and baking

Divide mixture and spread in bottom of both pans. Top each with 3 sliced peaches and 3

berries or other fruit of your liking can be used; use enough fruit to completely cover the

dough mixture. Sprinkle 1/4 cup sugar over fruit of each kuchen or to your desired taste.

crumbs or plain toasted bread crumbs. Sprinkle each kuchen with 1 teaspoon of

cinnamon over the crumbs. Amounts can vary according to your liking. Bake in a 350