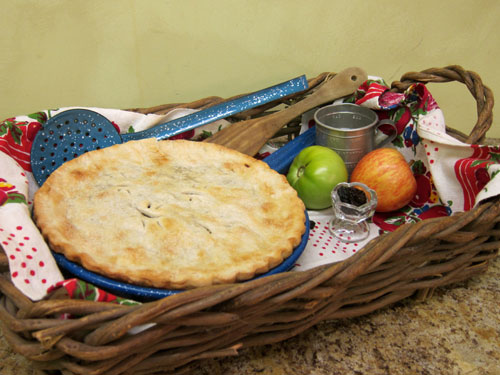 Grandma Edna Fulford was widowed in 1918, left with two small children and no means of financial support except her own ingenuity and the willingness to help in any way she could in her small rural Indiana community. Of course women of her time and place did not work outside the home; but her neighbors knew she was always available to come on butchering day and toil in their fields, gardens, and homes when needed.

Her pay was often cracklings, a pound of sausage, a bucket of lard, a piece of leftover fabric, or kindling for her stove. Fortunately she had a few hens and a cow, so some basic food stuffs were almost always available. Nothing was wasted. The rules of Grandma’s humble home were “Eat it up, wear it out, make it do, or do without,” though she was gentle in enforcing these guidelines.

Meals were simple, but she was creative and sometimes surprised my mother Minnie and Uncle Sol with little dishes of cornstarch pudding with berries on top. In the spring there were dandelion greens for her family and to trade to neighbors for a mess of asparagus or last year’s potatoes before they began to sprout.

Vegetables from her garden and extras from those of her neighbors were often preserved for the winter by canning and drying. When there was a threat of frost, Grandma was eager to harvest anything of her own or others that might be lost. One such item that could be counted on was green tomatoes. There were nearly always more of those than could be used.

Grandma and her neighbors made green tomato relish to can, and there were fried green tomato sandwiches for Minnie’s and Sol’s school lunch pails. But the special seasonal treat to be eaten when made and canned for later was green tomato mincemeat. (There was no actual meat in it, but that was the name of the recipe.)

There were always apples at the time of the year when the green tomatoes needed to be used, and with the addition of raisins (three cents a pound at Tom Houston’s little store) and spices, a delicious pie filling was created. When I discovered that my brother-in-law especially favored that pie, I began making green tomato mincemeat to add to my canning pantry. Needless to say, the family hears Grandma’s story when it is served a few times a year in our home, and, though not especially considered a “company” dish, Uncle Bob gets one for his birthday in January.

Yes, Grandma Fulford raised her children in a very difficult time of history, but she made the most of it. Her frugality got them through the 1920’s and 30’s until Minnie and Sol were out of school and able to get jobs and ease her burden. And how glad I am that her old recipe for green tomato mincemeat has survived the years so that I now have a good use of my unripened crop when frost is predicted.

Combine flour, sugar and salt. Cut in lard to form coarse crumbs. In measuring cup, whisk together water, egg, and vinegar. Sprinkle over dry mixture and mix with fork to combine. Form into 2 balls.

Cook together tomatoes, sugar, vinegar, salt, and flour, stirring constantly, until thickened. Add apples, raisins, butter, and spices and bring to a boil. Remove from heat.

Roll out other crust and cut designs to vent top. Layover filling; seal edges and flute rim. Brush top of crust with sugar-water and sprinkle with sugar.

Place pie near bottom of oven and bake at 400 degrees for 15 minutes. Cover edges with pie crust shields and turn oven to 350. Bake an additional 25-30 minutes or until filling bubbles and crust is done on bottom. Remove to cooling rack.

*This pie filling can be canned, using boiling water bath for 20 minutes.