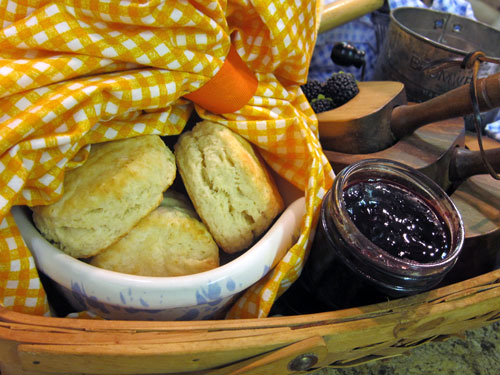 My great-aunt cooked for my great-uncle and their 200-acre farm’s hired hands for over 60 years. It must have been those decades of trial and error that made her such an accomplished country cook, because I never saw her open a single cookbook during the many summer vacations I spent there. Had there been just one lone cookbook in the house, I’m sure I would have unearthed it exploring the old farmhouse’s dozen or so enormous rooms, and rummaging through all those endless, forgotten hoards.

I watched her effortlessly throw together countless enormous noon meals, but I don’t recall ever helping out, except to set the oversized oak dining table and then clearing it after the feeding frenzy. There were rarely leftovers, and her melt-in-your-mouth baking powder biscuits were snatched up before the meat platters and deep bowls of potatoes and gravy fully made their way around the table. And no wonder …..

Pretty much an autonomous operation, the farm provided most of the ingredients for those tasty biscuits itself: lard from the pork renderings, cream and freshly-churned butter from the Jerseys, flour from the north 40’s wheat field that was milled locally. And the marmalades, fruit butters, jams and jellies that were slathered on all those biscuits! 0 my! A favorite jam of the hired hands was wild blackberry which Aunt Veryne dubbed “shadeberry spread”, no doubt because some of the largest berries were sheltered by out-of-place saplings growing along the fence rows.

Growing up in our rural farming community in the 50s was such a good thing – a time of innocence and simplicity. At 10 years of age, I was fearlessly walking down the quarter-mile livestock lane that led to the common watering hole, picking dead-ripe blackberries growing intermittently on the sagging cattle fence for Aunt Veryne’s dumplings, jams, and fruit butter.

One sweltering August I’d made the trek down the lane with the farm’s two dogs — a mixed male collie named Rex, and a black cocker spaniel, Chuckie. Having nearly filled a recycled gallon paint-can of berries, I was headed back to the farm house when an out-of-the-blue electrical summer thunderstorm materialized. I was petrified, certain that the fencing would electrocute me if my galvanized pail of berries wasn’t struck by lightning first!

I could never be certain how many cups of blackberries were flung from the pail as I raced, Olympic-style, back to the house but there was still enough for some blackberry dumplings for supper. Later in the week, I dubiously returned for another picking which ended up as blackberry jam.

Since Aunt Veryne’s culinary fare was “a pinch of this” and “a handful of that”, classic country cooking ….. my biscuits and jam are based on my recollections of watching her throwing together those memorable biscuits, swathed in that luscious black jam.

Combine ingredients in large heavy saucepan; cook over medium heat until berries are tender, 15-20 minutes. Run mixture through fine sieve. Pour into sterilized jars. Jam will thicken as it sets.

How to Render Lard

Preheat the oven to 225°F. Fill a large roasting pan with the chopped fat. Roast slowly for 30 minutes to 1 hour until the fat has melted and you have protein particles floating on top. Skim off the solid particles and discard OR set them aside for the chickens!   Pour the liquid fat through a mesh colander lined with a double layer of cheesecloth. Store in a glass canning jar in the refrigerator or freezer. It will keep for months.

How to Make Butter

Simply pour 1/4 cup of organic cream into a jar, tighten the lid, and shake, shake, shake. After 15 to 30 minutes of nonstop agitation, the butterfat will separate in clumps from the liquid. When that happens, drain the milk and place the butter into a bowl. Add ice and knead until solid, washing and draining melted ice as it forms. Refrigerate. For a yellow hue, add a few drops of yellow food coloring to the cream before shaking.

Begin with fresh wheat grain that has been separated from the stalks but has not been heated or treated in any way. Rinse the wheat thoroughly. Spread evenly on muslin cloth or fine screens, allowing it to dry completely.

Place the fresh grain in either a stone or metal mill. Mills are available in a variety of sizes, including small hand-operated mills for home use. Turn the crank on the mill, moving the wheat through the revolving grinders and collecting the resulting powder in the lower bin.