Growing up In an Italian family, I heard many stories. Whether they were about the “old country”, or tales about oddly-acting relatives, or working in the coal mines, they were short tales and often repeated over and over to anyone with an open ear. One of my favorites was often told by my mom, about the family getting together and eating Polenta. Polenta is an Italian version of corn meal mush, but worlds apart in flavor and satisfaction. The dish actually had its origin here in the America’s by Native American using maize. When Columbus came to the America’s one of the things he brought back to Italy was maize and the Indian version of corn meal mush, which in Italy became Polenta. My family had traditionally been rather poor and Polenta was considered a poor man’s meal. It was very popular in the poorer northern regions of Italy around Lombardy near Milan and Venice. And It so happens that my maternal grandparents are both from northern Italy in the Gubio region near Assissi. Coincidentally, they lived in villages just 20 miles apart, but did not meet until the early 1900’s when they had both immigrated here around 1913-1914 and were both living in Riverton, Illinois. When my grandmother immigrated to America, the recipe for Polenta and her sauce came with her. She passed in 1945 and although my mom was only 13, she now took over the job of preparing meals because all of her other sisters were so much older, married and did not live there anymore. My mom remembered making and eating many meals with Polenta.

Once the corn meal and water were mixed and cooked, forming a creamy dish of Polenta, the polenta was spooned onto a wooden cutting board. The polenta was covered with a tomato sauce and sprinkled with Parmesan, and the family would gather around the table, each with their fork or spoon, and dig in. Yes, they all would eat from cutting board’s mass of Polenta. Each starting in their corner or section and digging away at the delicious creamy mixture, often served along with Italian sausage. Interestingly, many times before they began eating, they would decide on a pattern to follow. Perhaps to dig with their forks and produce a map of Italy, or Illinois, or some cartoon character. It sounds like fun, except when you think everyone is digging in there with their own forks eating a communal dish. I don’t know how sanitary that was, but that is what they did time and time again. My mom told me how she would upset their design by taking her fork and making a trail through the polenta to where the others were stationed.

One reason Polenta was considered a family meal was that it was usually only eaten on special occasions like Thanksgiving, Christmas, or Easter. I don’t know how many ever sat down at one time to consume a board of Polenta, but from stories I have heard I would say at least 6-10 people. I am sure it did not bother anyone as our family has always been very close. My mom’s and my dad’s parents, brothers and sisters and their families lived within 3-4 blocks of our house. I literally was neighbors to most of my aunts and uncles, maternal and paternal grandparents who were still alive, and my cousins. Since one of my aunts owned a tavern, that served as a hub for family get-togethers during Holidays and important family events. We ate a lot of Polenta in that tavern!

Their stories were mostly about eating Polenta during the depression and then World War II. It was a simple tradition brought over from Italy. By the time I arrived on the scene in the early 1950’s, they had for the most part gone to eating Polenta on individual dishes. Also for some reason (and it may have been my dad’s idea), we started putting a slice of cheese in the layer of Polenta. The cheese would melt and just add to the flavor and appeal of eating the Polenta. Today, when I make Polenta, it brings back warm memories of my family, and I smile and always think of them carving out some map, some feature, enjoying the Polenta, forgetting for a moment that they were poor, and just loving each other. The Polenta I serve you today is covered with my meat sauce (which has been derived from my mom’s and my grandmother’s recipes. There are slices of brick cheese inside, and it is being served with our traditional Italian meat sauce. Enjoy! Mangia! 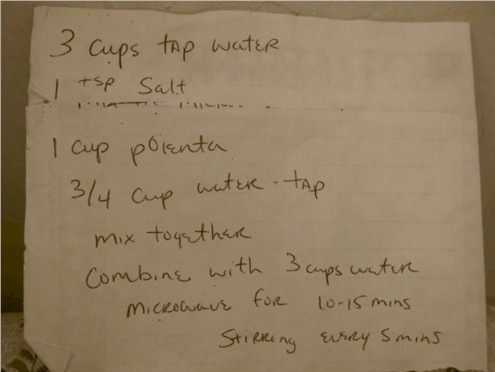 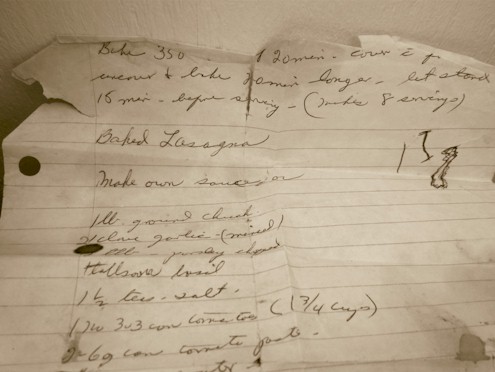 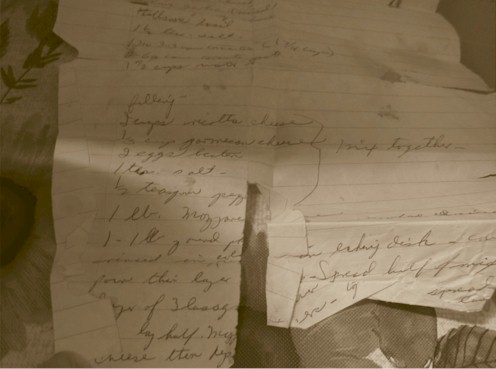